What We Know About the Winners of the $1.5 Billion Powerball Jackpot

Who’d want to go public with that anyway? 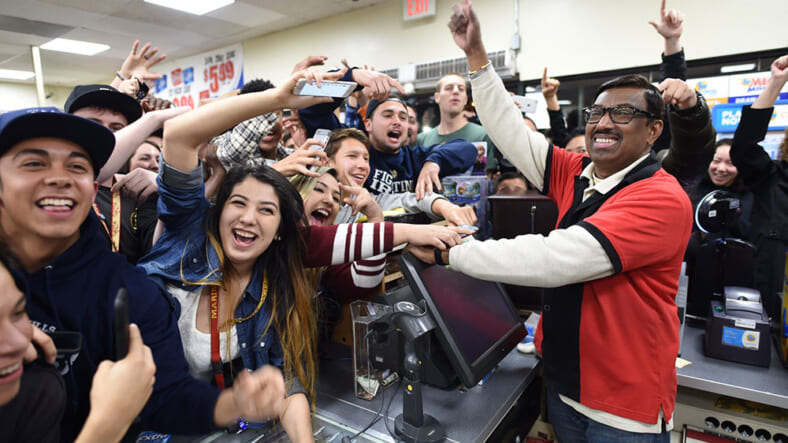 If someone won the lottery, they sure aren’t telling the rest of us.

There were three winning tickets for the massive $1.5 billion Powerball lottery jackpot drawn Wednesday, but as of Thursday morning  the names of the lucky winners are not public knowledge. One ticket was purchased in a California 7-11 located in suburban Chino Hills, and local residents flocked to the store to celebrate with the clerk, because apparently that’s what you do. Two more winners were sold in Florida and Tennessee.

Reuters reports that the lucky winners will have to split the gargantuan payoff three ways, with each winning ticket worth $528.8 million, according to the California Lottery. Owners of the stores where tickets were sold will also receive a million dollars.

While Americans wait to learn who came out on top in this year’s record Powerball, rumors and hoaxes are beginning to crop up online. Pro skateboard Erik Bragg posted an Instagram photo claiming he was a winner, but the ticket he brandished oddly lacked in numbers on lines B, C, D, and E.

OMG I WON $1.5 BILLION!!!!! I'm posting this in case anyone tries to jack me this is proof! Look it up, I bought in chino hills where I grew up! #powerball

If Bragg really just picked one line of numbers and the exact numbers at that, he should quit skateboarding and become a prophet. His hoax (or joke? who can tell these days) still received plenty of attention online, which was probably payoff enough.

The real winners may not be too enthused about going public, given that the size of their winnings will likely attract immediate and unwanted attention from others who want a slice of the pie. Unfortunately, the only states that allow lottery winners to remain anonymous are Delaware, Kansas, Maryland, North Dakota, Ohio, and South Carolina, so we’ll likely learn their names soon enough.

Hopefully the winners in Tennessee, California and Florida are spending their time before claiming winnings locking down an “undisclosed location” where they can safely retreat once they have their money. But what will they do? We suspect they’ll take some time to process their good fortune, fill up an empty pool with cash, and roll around in their green for a while before becoming philanthropists and investors. We know that’s what we’d do.