It’s a Total Eclipse of the Heart. 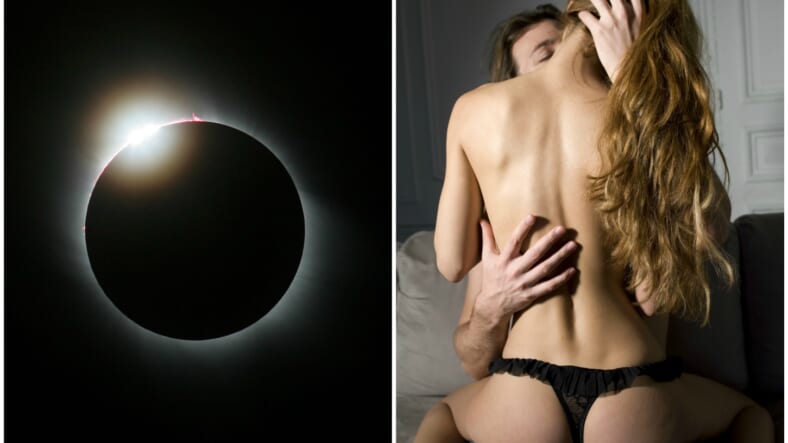 On August 21, the moon is going to pass between the sun and the earth at a staggering 1,500 mph, resulting in what we commonly know as a total solar eclipse.

We haven’t seen a solar eclipse from coast to coast since 1918, so this is a big deal. Get excited!

To help elaborate, The Verge, with some scientific info from NASA, puts it this way:

An eclipse is the serendipitous alignment of the Earth, the Moon, and the Sun. Around every 18 months or so, the Moon passes directly between the Earth and the Sun on its orbit around our planet.

It’s a relatively rare occurrence because the Moon doesn’t orbit in the same plane as the Earth and Sun. But when the three bodies line up just right, the Moon covers up the disc of the Sun, and those in the direct path of the Moon’s shadow — called the path of totality — will see the Sun go dark.

As you can tell, a lot of moving pieces need to meet at the same point in the sky for just a little while, which isn’t an easy thing to do, considering outer space is so massive. Like I said earlier, this eclipse is a biiig deal.

In fact, it’s so important that Bonnie Tyler is going to perform “Total Eclipse of the Heart” during the eclipse, and it’s going to be amazing.

And guess what else? Apparently, eclipses make people want to take their clothes off and touch each other. Why? Well, simply put, it’s the magic of astronomy. But I’ll elaborate some more.

L-O-fucking-L. What a loony! Thanks, Mel Magazine, for pointing that out, along with everything else I’m about to mention. Even though the post has since been deleted, that’s the funniest/craziest shit I’ve ever heard.

But I’m sure he’s not the only wacko who’s a slut for solar eclipses – I have a feeling there are others out there who intend to transcend humanity by bumping uglies in the middle of a pentagram during the eclipse, or light a halo of candles and jerk off towards the flame, or something.

The answer, my friends, is complicated, and if you’re not a believer in astrology, you’re going to think this is all a load of dung. But it’s interesting nonetheless, so I encourage you to keep reading.

First of all, this solar eclipse is more dramatic than a bridezilla on her wedding day, due to the fact that it falls in Leo, which is the most dramatic sign in the zodiac.

On the sexy drama of the eclipse, Coveteur says:

The big takeaway here is how you deal with visibility and doing what you love in public. It’s not something that comes easily to everyone, but it’s something we all eventually have to deal with. What happens now helps you dig inside yourself and find your Sasha Fierce, the part of you that loves the spotlight (or learns to love it, anyway).

Moreover, the eclipse is an animalistic phenomenon that brings out the sexy beast in all of us….or so they say.

According to a report on the 1878 eclipse, animals basically short-circuit when sudden and unexpected darkness occurs, and do really weird things.

Animals perceived the ebbing of the light, and they responded as they normally would at the close of day. In Rawlins, [Wyoming] owls emerged. Farther north, in a Montana gold mining down, “all the cocks in the city began to crow lustily and in a regular succession.” Across the region, cows turned homeward and pigeons went to roost. Grasshoppers folded their wings and fell to the ground.

“All the cocks in the city began to crow lustily,” eh? How sexual.

But still, if those pea-brained animals get all confused and wonky when the moon randomly blocks the sun, I’m sure us humans are going to feel it in our loins, too. Well, maybe. I don’t know.

Reason 3: Some people, called umbraphilliacs, are obsessed with seeing eclipses, and describe their addiction very similarly to being in love.

Psychologist Kate Russo spoke with some hardcore eclipse-lovers on how they truly feel when they see an eclipse, and this is how she summed up their emotional process:

“A Sense of wrongness, Primal fear, Awe, Connection, Euphoria, and the Desire to repeat the experience. Over and over…this sequence holds true.”

Anyway, before we part, let me offer this one important piece of advice if you do end up having a nookie during the eclipse: use a condom if you’re catching some strange.

According to medieval tradition, children conceived during eclipses will be ugly as sin and filled with demons. It’s probably not true, but you can never be sure, so just wrap it up if you’re going to get it on that night.