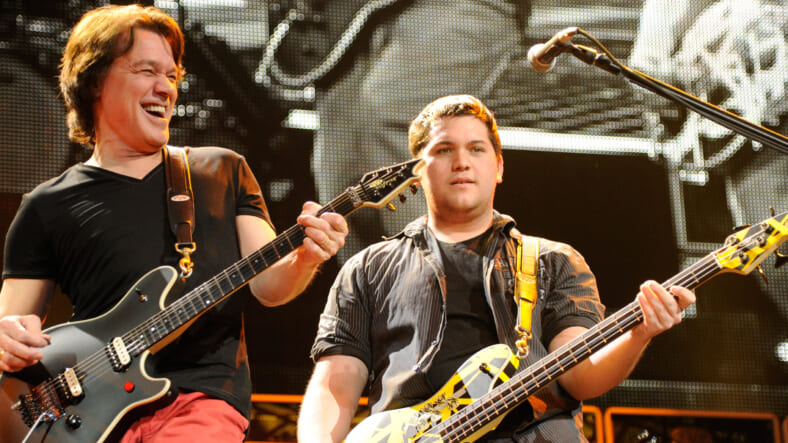 Scammers don’t care how they get people to buy what they’re selling as long as the money arrives. That’s why—at least according to Brobible and the Van Halen News Desk (VHND)—sketchy CBD oil hucksters have allegedly appropriated just-departed guitarist Eddie Van Halen for an ad masquerading as an article in People magazine.

Via VHND, here’s a brief quote from the fake article, which we won’t link:

While many might not be aware, Eddie Van Halen died of throat cancer. He didn’t like to talk about his struggle with the disease, but he did chime in on the healing properties of CBD Oil and the warmth that its calming effect provided the last months of his life.“When I got my diagnosis, I was devestated. And when you’re a rock star, there’s this pressure to never show a sad side. My manager pointed me to CBD oil, which I admit I was skeptical of.

And no, that’s not actually People, they have better editors than that. Wolfgang Van Halen first addressed the article on Facebook, writing in part, “This CBD oil thing claiming to be some final gift from my dad is all bullshit. Just another batch of soulless fuckers taking advantage of this horrible situation just to make a quick buck off naive fans. Fucking assholes.”

Also, before people start attacking People Magazine, it’s not actually an article from them. This CBD oil company is using it as a template to scam people.

If you DO happen to know the people behind this, by all means harass the shit outta them. You have my blessing. https://t.co/PMeS10ydXj

Wolfgang Van Halen only lost his dad a month ago and is still in mourning, as he wrote in another tweet.

Not a second goes by where you’re not on my mind.

I love you so much, Pop.

It’s really hard being here without you. pic.twitter.com/U2taNK255h

“It’s really hard being here without you,” Van Halen said at the end of the tweet.

Unfortunately, using a celebrity living or dead to try and promote a product isn’t that unusual. Very much alive movie star Tom Hanks and Dr. Mehmet Oz had the same thing happen in January 2020, reported the real People magazine:

In response to the impersonation, Hanks assured his followers he “never said this and would never make such an endorsement.”“Come on, man! Hanx!” he added.Dr. Mehmet Oz, who was mentioned as a supporter in the fake endorsement, also shared that the ad was not real and stood up for Hanks on social media. “Could not agree more with @tomhanks,” the television personality tweeted. “This is a fake and misleading advertisement intended to take advantage of consumers using false claims and our likenesses illegally.”

As owners of such sites are hard to determine the fakes may stay up for some time, until ISPs–or enraged Van Halen fans defending Wolfgang and Eddie—shut them down.