This was a bad idea. 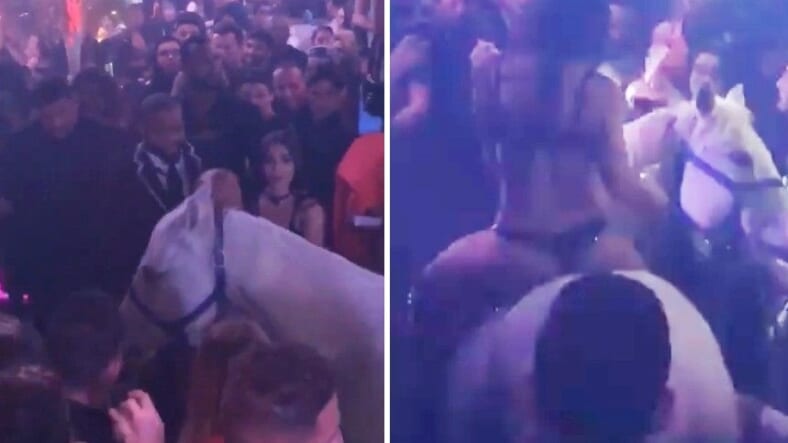 Imagine you’re at the club, on the dance floor, and you’re having a killer time, sloshing beer on everyone around you. Then a woman in a bikini rides a white horse into the middle of it all.

That sounds like one of those weird dreams people have after eating pizza or taking LSD but it really happened Thursday at the Mokai Lounge in South Beach.

Veterinarians, animal behaviorists, and horses all agree that horses don’t belong on dance floors. So the horse freaked out, as you can see in the video, and then everyone else freaked out. It was a bad scene.

It’s natural to joke about this because it’s so ridiculous, but once the footage made it online, some also naturally called it animal cruelty. A petition was circulated to yank the club’s license, but more seriously, the Miami Beach PD is involved.

UPDATE: Miami Beach PD detectives along with @MiamiDadePD ’s animal experts have located the horse that was at Mokai. The horse has been inspected and deemed to be healthy and safe by Miami Dade PD.

The New York Post reports the Mokai Lounge even took down its Yelp page. The reviews after the horse incident were—as you might imagine—awesomely awful.

The lounge is currently closed. The woman in the bikini is probably still wearing a bikini. It’s South Beach. The horse is hopefully eating a double portion of oats.