Hate to be sitting behind her. 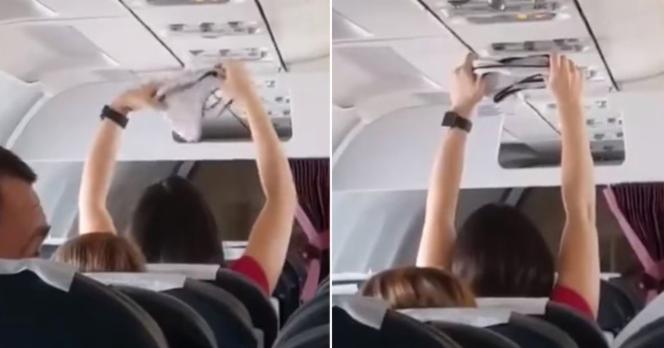 Passengers who fly Spirit Airlines can get kicked off a flight for showing too much cleavage. United Airlines prohibit travelling with an “emotional-support peacock.” But on Ural Airlines, people can dry off their underwear in the middle of the damn cabin without issue.

Don’t believe us? Check out the woman in the video above. She casually held a pair of what appear to be cotton panties up to her air vent on a full Ural flight from the Turkish resort city of Antalya to Moscow.

The circumstances surrounding this bizarre in-flight behavior are unclear, i.e. why the underwear needed drying in the first place. Commenters posed that “maybe the takeoff was sort of extreme,” or that they belonged “to a child.”

This is what happens after you eat tide pods.

I have soooooo many questions… 🤔 https://t.co/PWbYRTprt0

If I were on a Plane and see someone drying their underwear using the Airplane vent, I’d be HELLA PISSED and DISGUSTED!!!!!! I mean, who knows what they have going down there in their nether regions. 😷 @TheView #TheView

An eyewitness told The Sun that the woman didn’t seem remotely embarrassed as she dried the undergarment for at least 20 minutes.

That’s definitely disgusting, but at least she didn’t punch anybody.