This is what happens when women get fed up. 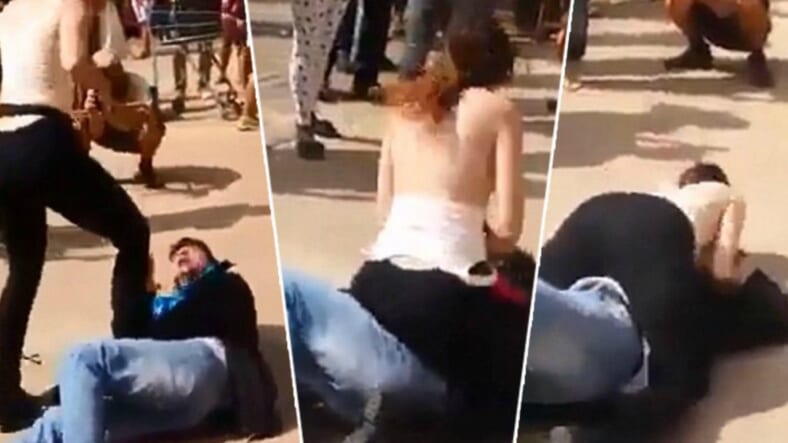 We can see a prime example of how much women dislike harassment in this video that was taken in Brazil, where a woman totally pins down a dude who allegedly harassed her, and then proceeds to take her top off and rub her boobs in his face.

The footage is from Ribeirao Preto city center in southeast Brazil, and shows a woman handing out flyers on the street completely lose it and throw the man on the ground, and then get on top of him and suffocate him with her naked breasts, shouting something in Brazilian about being harassed for simply doing her job.

The woman’s actions of going crazy and attacking the dude was met with both admiration and condemnation, and while some believe it was respectable that she jumped the man, others think it was just bizarre and uncalled for.

One woman in the video shouts: “This is absurd, there is no justification for doing this. How can you do this in front of children in the city centre? You’re disrespecting women with your actions.”

However, the whole thing is apparently a stunt staged by a theater crew to bring awareness to catcalling and unwanted attention women are subjected to when working in public places, says Daily Mail.

Fausto Ribeiro, director of the Confluencias group, who reportedly staged and crafted the video, said:

We wanted to expose and address something that happens every day to our sisters and female friends. This was meant to challenge people’s perceptions and empower women with the shock tactic of retaliation.

We wanted to force men to think more responsibly about their actions and their consequences.

Even though the video is from last year but then taken down after it received heavy criticism, it recently resurfaced due to the Harvey Weinstein scandal in Hollywood, where he was accused of sexual assault and rape by over 80 women.