We Spent a Weekend With a Private Plane, And Hot Damn We Never Want to Fly Commercial Again

Here are 10 reasons we’d give up our firstborn for a Cirrus SR22T of our very own. 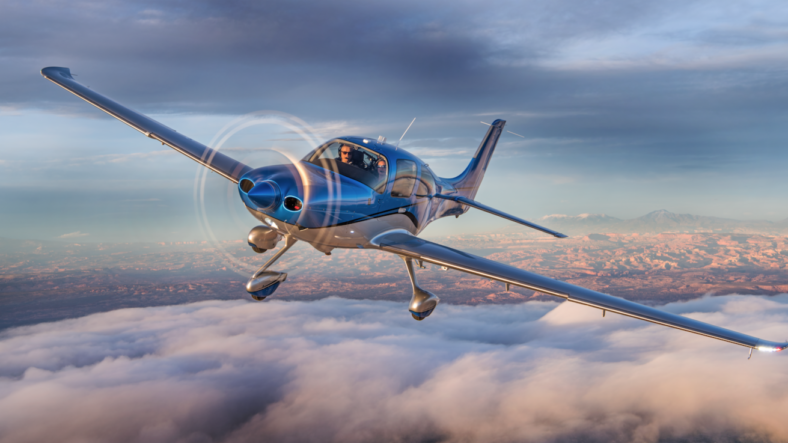 Assuming you’re lucky enough not to get dragged off the plane or involved in an all-out brawl, you still have to get through hellish security lines and nasty gate agents in order to squeeze yourself into a fart-filled cylinder.

But there is another way, dear reader.

We recently spent a weekend with full access to both a brand new, sixth-generation Cirrus SR22T and a highly skilled, yacht rock-loving pilot named Ivy McIver (who also happens to be the company’s SR Product Line Manager). It was pretty damn sweet.

Our journey took us from Westchester, NY, to Burlington, VT, to Martha’s Vineyard, MA, and back stopping for beer, cocktails, maple syrup and more beer along the way. Life is pretty good indeed when your designated driver happens to fly airplanes.

OK, so owning a private plane is incredibly expensive, but maybe not quite as insane as you think. The base price for an ultra-sleek, single-engine Cirrus SR22T is $639,900 (we were in an optioned-out GTS model that goes for $905,700), which is pricier than a supercar like the Lamborghini Aventador, but far cheaper than a hypercar like the Ferrari Aperta.

So if you’re a tech mogul, lottery winner or celebrity spawn, this might be the transportation investment for you. Here’s why.

Aside from everything else, perhaps the worst part of flying commercial is that you just sit there. Sure, maybe you can catch up on the latest prestige drama or pour yourself a year’s worth of sodium via Bloody Mary, but the fact is you have no clue what’s going on outside of what position your seat back is in.

Sitting shotgun mere inches from the pilot, you can’t help but be involved with the journey when flying in the SR22T. Especially if you’re the type of person who likes grilling his own steaks or restoring a classic ride, this level of participation is incredibly fun. As the pilot switches from one air-traffic control center to the next, ascends slightly to get above the clouds or nails the perfect landing, you’re right there with them.

2. You can bring anything you want.

There’s no TSA to contend with when flying private, so we were able to load the plane up with all the liquids, syrups and lotions we wanted. (OK, that sounds a little weird.) Seriously though, there’s something very satisfying about being able to throw a growler of beer—more on that below—into the truck of a damn airplane.

3. You get very comfortable very quickly.

I’ll admit it—climbing into the tiny plane is kind of terrifying at first. And, no, I didn’t tell my mother what I was doing until I was safely on the ground. Just look what keeps happening to Harrison Ford!

After flying for just a few minutes, though, I started to feel at ease. Boarding the second time was far easier, and by the third time I got on, I might as well have been a kid jumping into the back of mom’s station wagon. (That is, if mom’s station wagon were upholstered with some of the finest leather on Earth.)

The entire interior of the plane—especially the back—is incredibly automobile-like. You feel like you’re rolling in a sleek luxury car rather than a dang airplane. Eventually, the only scary part is just how easy it is to get used to.

4. You develop a great rapport with your pilot.

As comic Mark Normand cracked recently about air travel, “The pilot, he’s like the principal. He’s up in his office and comes on the loud speaker. You don’t really want to meet him, but if you do you know you’re in trouble.” He’s got a good point.

When you’re strapped into an SR22T, the opposite is the case. Sure, our pilot had to keep an eye on a bunch of gauges, occasionally radio air-traffic control and, you know, actually fly the plane, but she also was able to chit-chat, tell us what she was doing, and, perhaps most importantly, ensure the Sirius radio kept churning out light rock classics from the ’70s and ’80s.

There’s nothing better to fly to than Hall & Oates.

5. Your Instagrams are off the chain.

Let’s just say it’s incredibly hard not to be totally obnoxious. Bow Wow, we completely understand why you had to lie.

6. You can drop by a craft brewery…

It’s probably pretty telling that, given the chance to go absolutely anywhere, we ended up at a brewery. Foam Brewers in Burlington, VT, happened to be celebrating their one-year anniversary of producing delicious craft IPAs, pilsners, and sours on the day we, quite literally, dropped in.

It was pretty much the perfect afternoon.

7. …Then play Rampage at a killer cocktail bar.

What’s the only thing better than a top-notch cocktail? Placing said drink next to a Ms. Pac Man machine and blasting past 100,000 points after not having played in at least 10 years. (I’m proud, OK?!)

The Archives arcade bar has an incredible collection of craft beers and delicious cocktails (my favorite was the Ghostbuster-influenced Spooky Ectoplasm) as well as dozens of arcade and pinball machines. When was the last time you played Rampage, Spy Hunter or Marvel vs. Capcom?

So, yes, we took our private plane to drink and play video games. Don’t judge.

8. You can change your mind about where you’re going mid-flight.

Imagine you’re on your way to brunch in Boston. You’re sitting shotgun in your Cirrus and you think to yourself: “You know what, I’ve been to Boston.” You tell the pilot and she says, “How about Martha’s Vineyard?” You respond, “Sounds fancy, let’s go!”

9. You can grab brunch in, say, Martha’s Vineyard.

It’s one of the most exclusive pieces of land in the entire country, and truly a pain in the ass to get to from just about anywhere, but chilling in Martha’s Vineyard is a cinch when all you have to do is, uh, land.

An island located south of Cape Cod in Massachusetts, “The Vineyard,” as it is known to rich jerks, is a favorite vacation spot for power players like the Clintons, Obamas, David Letterman, Bill Murray, Larry David and Spike Lee.

We didn’t see any of them while brunching at the restaurant in the Wings-like regional airport, sadly, but I was happy enough to be curing my hangover with a bacon-filled grilled cheese.

10. You can fly over the Statue of Liberty.

Ivy brought us in slow and low around Brooklyn, over the Verrazano Bridge and then right up the Hudson River. Along the way we buzzed over Lady Liberty, the Freedom Tower and the eastern shore of Manhattan before hooking a right over the Tappan Zee Bridge and returning from whence we came, Westchester County Airport.

Perhaps the most important lesson I learned over my weekend with access to this incredible machine and awesome pilot? Instagrams posted from commercial flights are far less baller.