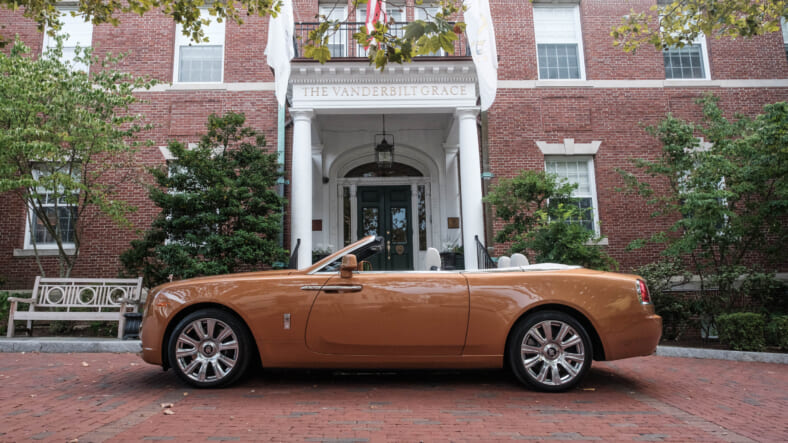 A $402,674 automobile is not about transportation. In the case of, say, a Lamborghini, it can be about thrilling performance or about striking a dramatic pose at the valet.

In the case of the Rolls-Royce Dawn, it is about the elimination of tension from the owner’s life, like a rolling spa or a V12-powered mediation chamber. It is as if the Dawn’s Tuscan Sun paint is chemically repellent to bad vibes from the real world.

Such a space may not be conducive to staying awake, which is OK, because the Dawn is equally optimized for travel in either the front seats or the rear. That’s what separates the Dawn from the Wraith, and from competitive open-topped luxury barges. The Dawn’s focus is on submerging rear-seat passengers in decadent comfort, while in other cars the driver is the focus.

The Dawn’s posh perfection can be summarized by reviewing ten features that make this car the most opulent four-passenger open-air ride since the Windsor family’s royal coach.

The Dawn features rear-hinged, front-opening doors that Rolls-Rolls terms “coach doors.” (We avoid that unfortunate “suicide door” slang here, thank you.) A challenge of doors that pull closed at their fronts is that it is a long reach to close them from the seat. No matter, Rolls includes a button that passengers can use to close the door automatically. Well, when an attendant isn’t there to do the job.

While those doors are open, you may notice the chromed hilt of the umbrellas that are sheathed within each door jamb, ready to spring forth to protect passengers from inclement weather.

This is a two-door convertible. The back seat is supposed to be a torture chamber. At best, it should be no more than tolerable. The Dawn has the rear seats of a limo, with abundant legroom and a cocoon of leather and wood to make occupants never want to leave.

4. The quietest cabin ever in a soft-top convertible

The Dawn’s cabin noise is the same as that of the Wraith, a coupe with a metal roof, according to Rolls-Royce. The hushed cabin is astonishingly placid for a convertible with a traditional soft roof rather than a metal folding hard top. When a noisy vehicle passes in the opposite direction, the ability to detect when it has passed the windows and reached the soft rear roof pillar area is a clue that the roof is canvas, but it is really only discernible if you are trying to notice it.

That’s what Rolls-Royce calls its cars’ signature ability to “waft” up hills or through its 4.9-second 0-60 mph sprint without any visible effort. The Dawn achieves this thanks to its utterly silent 563 horsepower, 575 lb.-ft., twin-turbocharged 6.6-liter V12 thrust with dynamic throttle mapping.

If that weren’t enough, the eight-speed ZF automatic transmission makes decisions about potential gear changes based on its knowledge of the road and the car’s location through GPS navigation. Your car’s transmission doesn’t know where it is, much less whether there is a hill or curve approaching.

The Dawn’s chromed sculpture of Eleanor Thornton atop its imposing grille might prove an irresistible souvenir to a passerby, so it automatically retracts if someone grabs it. It also does this in the event of a collision to avoid spearing pedestrians.

Back in the day, Rolls-Royce didn’t even publish horsepower specifications for its cars. The point of a Rolls-Royce isn’t to engage in crass comparisons. It is to do the job perfectly. Today, the Rolls-Royce Bespoke Audio system is similarly unrated, so we don’t know the wattage of the amps driving this 16-speaker system, only that it sounds fantastic and that its active volume adjustment and tone control make changes to compensate for top-down road noise.

Convertibles tend to look much better with the roof folded down than when the roof is up. The Dawn looks like the hand-build custom car it is, with French seams in the canvas and taut lines absent any of the “hungry horse” sags between supporting bows. Also, the roof goes up or down while driving as fast as 31 mph and completes the job in what Rolls calls a “silent ballet” in 22 seconds.

The Dawn’s wood deck covering the folded convertible top is positively indulgent, with open-pore wood that begs to be touched for the tactile experience. That deck spills down between the rear seats in a cellulosic waterfall to remind passengers of the wood’s awesomeness even with the roof is raised.

Despite its open roof, the Dawn enjoys a rigid body structure that escapes the wet dog shake familiar to most convertible drivers when the car strikes a bump or pothole. Its air suspension and active roll bars produce the characteristic Rolls-Royce “magic carpet” ride that renders the passing road a seeming video display, so far removed are its perturbations.

These are the factors that contribute to a car earning its place when it costs more than the average American home. They may not add up to a business case in favor of purchase, but the emotional case is airtight.