This 1968 Ferrari Spyder is Expected to Sell for $26 Million

The fabled Prancing Horse is up for auction next month. 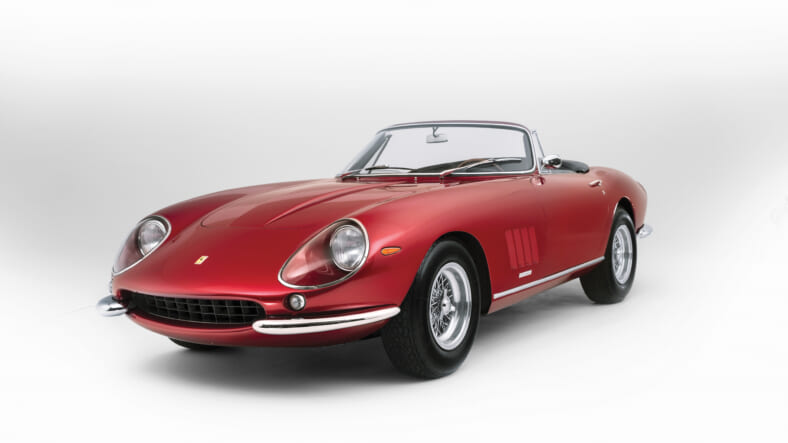 An ultra-rare and extremely gorgeous 1968 Ferrari 275 GTS/4 NART Spider, the very last example to leave the Ferrari factory, is expected to fetch up to $26 million when RM Sotheby’s puts it up for sale at their Monaco auction on May 14 during the Grand Prix de Monaco Historique weekend.

RM calls the car “unquestionably one of the most important road-going Ferraris in history, substantially rarer than virtually all of its iconic colleagues.” Only ten were ever built as part of a collaboration between famed American Ferrari importer Luigi Chinetti and Enzo Ferrari, with this being the last of one produced.

The model gained instant fame when Steve McQueen drove one on screen in 1968’s The Thomas Crown Affair, and the King of Cool soon acquired an almost identical example of his own in coupe form. Other 275 owners included Miles Davis and Peter Sellars.

The car features a dark red metallic finish and tan leather interior paired with a rip-roaring 330-horsepower V-12 engine. “Ownership of a NART Spider represents membership in a club of only nine other enthusiasts around the world,” notes Rob Myers, Chairman and CEO, RM Sotheby’s. “If a Ferrari is the choice of car connoisseurs, then the NART Spider is the choice of Ferrari connoisseurs.”

Of course, it could well go for even more than $26 million given the overheated classic car market, though it has some way to go to catch up to the $36 million 1957 Ferrari 335 S Spider Scaglietti that became the second-most expensive car ever auctioned earlier this year. Got space in your garage?