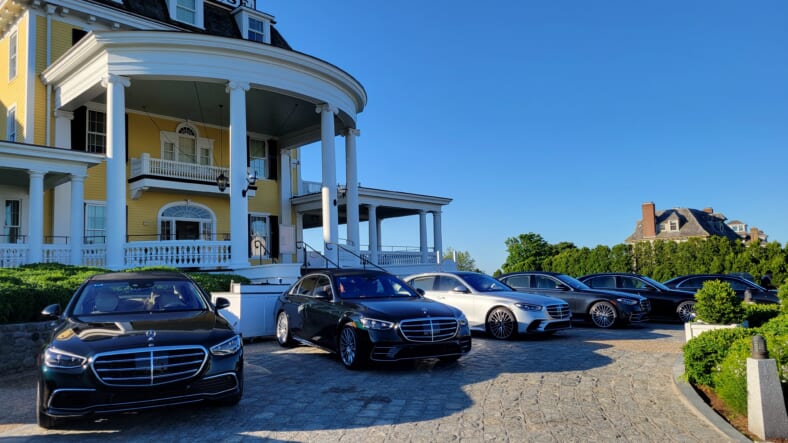 Since 1972, Mercedes-Benz’s top-of-the-line, flagship cars have been given the moniker S-Class, and in the years since they’ve become the benchmark and byword for extremely elegant, powerful, and technically proficient sedans, the preferred transport of everyone from heads of state and CEOs to celebrities of all stripes.

With a starting sticker price of about $110,000—for the “base” S500 4MATIC, which like the more expensive S580 is equipped with all-wheel drive—the S-Class is as understated as a six-figure sedan can get; its 50 years of finesse (though its bloodlines go back much further) are expressed in every stitch, angle and effortless mile.

As the legendary marque puts it, the majestically-proportioned S-Class “exemplifies the allure of Mercedes-Benz,” and though it also embodies tradition, in recent years Mercedes has made it a showcase for ever-more-impressive technology designed to elevate a mere ride or drive to an unforgettable experience. And the new 2021 S-Class is no slouch in any regard.

For 2021, more is more: the new S-Class is “more thoughtful of its passengers, more in tune with its driver, and more protective of those within—or even near—its elegant presence,” a “seamless combination of luxurious form and intelligent function thoughtfully executed down to the smallest detail.” And it’s equipped with a form of AI, plus 007-style biometric authentication, to boot.

Its most avant-garde feature is its enhanced MBUX (Mercedes-Benz User Experience) system, which is not only more powerful, intuitive and intelligent then its predecessors, but which can actually learn and grow over time. And the car’s nerve center is its advanced multiscreen, multitouch digital cockpit, that, among other things, can be activated via fingerprint, facial and voice recognition.

The exterior, created with Mercedes’ Sensual Purity aesthetic in mind, gives clues to the treasures within: a newly-designed stretched hood, C-Pillar “flowing into the sculpted shoulder”, and increased length, width, wheelbase and track width; and the timeless star emblem mounted above the classic grille. Mercedes notes that the S-Class stakes its claim to high status with its sybaritic “prestige measurement,” i.e. the distance from the front axle to the windshield.

Those well-versed in Mercedes lore can distinguish the S-Class from the appearance of its taillights alone. The hierarchy of Mercedes sedans is revealed in these displays of innovative lighting technology, along with the car’s distinctive three-point daytime driving light signature. All-new seamless door handles meanwhile are electrically extended when the driver approaches, or the outer surface of the door handle is touched.

This is all relatively subtle however; once ensconced in the driver’s seat, or equally appealing, the rear cabin, the aura is comparable to that of a private jet. That’s thanks to a flowing, three-dimensional design theme, and the range of expression available due to myriad customization options. Personally we prefer the progressive perforated diamond pattern of the full-grain Nappa leather options—the tool used to microperforate the seats operates with 16,000 needles—in a shade of saddle brown.

The new S-Class offers ten different massage programs, with up to 19 motors controlling all the available functions. A hot-stone massage simulator is created using seat heating combined with inflatable air chambers in the active multi-contour seats. There’s also a heatable additional cushion for the head restraint available for the two electrically-adjustable rear seats, making for a truly hedonistic experience, set off by trim elements in open-pore walnut wood.

That’s all enhanced by advanced LED technology, with an LED in an optical fiber every 0.6 inches, that enables interactive interior ambient lighting, which can support and augment everything from the entertainment system and climate control to the driver assistance and safety features, which are of course second to none. If you want it to, the S-Class can practically drive itself, and it can certainly compensate for even a moment’s distraction and avert catastrophes with the greatest of ease.

The marque’s signature “Hey Mercedes” voice assistant—which speaks 27 languages—is now practically on a par with Jarvis from Iron Man, with enhanced learning and dialogue capabilities and interaction with the Mercedes Me app. The system can now recognize vehicle occupants by their voices, and once learned, can be used to activate unique driver, or passenger, profiles, automatically activating preferred settings from seat position to sound system, lighting, and other functions.

A new-generation steering wheel, which features capacitive touch control buttons, centers the cockpit, with its 12.3” digital Instrument cluster, and 12.8” touchscreen OLED multimedia display—the first ever in a Mercedes-Benz—in the center console, with the potential for up to five screens in the front and rear, per your preference when ordering your S-Class. And an all-new Augmented Reality Head-Up Display system rivals anything you’d find in an F-35.

Sound is of course live-concert quality, thanks to new Burmester High-End 4D Surround Sound System options with up to 1,750 watts, 30 high-end speakers, and two resonators in each seat. The latter convert bass tones into vibrations, bringing automotive audio onto a new plane altogether. The system also works in tune with lighting and climate to create the car’s Energizing Comfort programs, designed to keep you alert and refreshed on even the longest of drives.

And now a word about the new S-Class’ engines. A six-cylinder in-line (S500 4MATIC) with 429 hp, and a V8 (S580 4MATIC) with 496 hp are the first engine variants for the new S-Class in the U.S., both are equipped with an integrated starter-generator (ISG) and 48-volt onboard electrical system. The ISG is responsible for the new S-Class’s energy-conserving hybrid functions, such as EQ boost and energy recovery, achieving fuel economy unheard of in luxury cars of this size.

So where is the ideal place to test drive this marvel of design, engineering, luxury and exclusivity? Heads of state use their S-Classes to commute from palace to parliament. We took ours on a ritzy road trip to Rhode Island, and the five-star Ocean House in Watch Hill, New England’s most beautiful historic seaside resort. Located right next door to Taylor Swift’s equally impressive mansion, the Ocean House is a member of the prestigious Relais & Chateaux association of world-renowned hotels and resorts.

First off however, we stopped for lunch en route at Artisan, the ruggedly elegant restaurant, tavern and garden in Southport, Connecticut, part of the tony town of Fairfield—natural habitat, like Westerly, for the S-Class and its well-heeled owners. Getting us in the New England mindset, Artisan’s locally-inspired and sourced cuisine emphasizes a farm-to-table approach, as it should.

We selected an S580 in Emerald Green Metallic for the jaunt, with our favorite color combination of saddle brown leather. While the S-Class performs admirably in traffic, shielding you from the outside world, and the failings of other drivers, with all the comforts of a private club, and dispenses with the headaches of traffic thanks to its DISTRONIC adaptive cruise control with Active Distance Assist and the ability to make autonomous turns, it was on the country roads leading to Westerly that we learned just how much fun the new S-Class can be to drive.

Incomparably smooth, powerful acceleration, the E-Active Body Control active suspension system, satellite-guided navigation that can adjust to the contours of the road, and all the artistry of Mercedes’ engineers have combined to make a very sizable vehicle feel lightweight and nimble, including boasting an impressively small turning circle, reduced by up to 7 ft. over the previous model. Needless to say, we rolled up to the Ocean House in style.

“Luxury today is defined by comprehensive refinement,” as Dirk Fetzer, Mercedes’ Head of S-Class Product Management, puts it. “A truly luxurious driving experience depends on a host of factors and must appeal to all the senses.” We’d say that’s a pretty apt description of our time behind the wheel of the new S-Class.

We may never be elected Prime Minister of a G7 country. But at least we can say we’ve seen how the other half drives.