The 2017 NSX Isn’t Just the Fastest Acura Ever, It Might Be the Most Fun 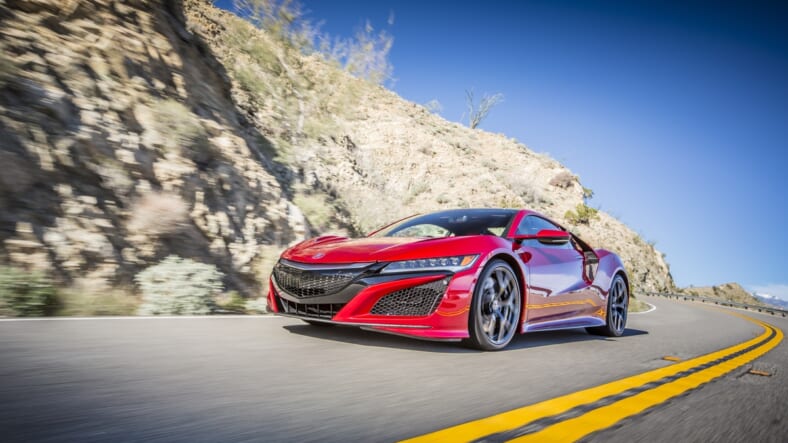 When the Pixar Animation family classic Toy Story was in development, then-owner Steve Jobs halted the production, ordering a rewrite to make the Woody character more likable. Such a dramatic change, so late in a film’s production usually bodes ill for the final result, but it turned out to be just what Woody and Buzz needed to become new fixtures in the American childscape.

Similarly, only about two years ago, Acura concluded that its NSX design was unacceptably compromised and ordered a major revision. As with Toy Story, this change further delayed a project that was already behind schedule.

It is too soon to know whether the 2017 Acura NSX will ever establish a reputation as sterling as that of Toy Story, but we do know that the decision to change the orientation of the engine in the chassis has produced exactly the sort of track-worthy machine buyers in this category demand. For starters, it’s the fastest Acura ever with a 191 MPH top speed, and can scorch from 0-60 in just three seconds flat.

The car’s significantly racy design change was to turn the engine 90 degrees so that it is placed in alignment with the car’s spine (like a race car) rather than sideways between the rear wheels (as with most street cars these days).

This pushed those rear wheels a few inches further rearward and shifted the NSX’s weight balance slightly forward, producing exactly the race-worthy handling expected from such a car. The original 1991-2005 NSX employed a transverse engine layout successfully, but with 290 horsepower, it had far less power to put to the ground and did so at lower speeds.

The 2017 NSX’s 3.5-liter V6 is twin-turbocharged, which pumps it up to 500 horsepower, and gets a 119-horsepower assist from a trio of electric motors. One electric motor is bolted to the gas engine and helps drive the rear wheels, and the other two are at the front of the car, providing power to the front wheels.

Total system power is 573 peak horsepower, because, as with the romantic capacities of men and women, the gas engine and the electric motors hit their peaks at different times.

The engine peaks out through the window in the rear cover, revealing Y-shaped intake plumbing that lacks some fiber optic lighting to resemble a time-traveling flux capacitor. Its attached electric motor starts the gas engine none of the uncouth whining of a conventional starter, but rather with a “Vrroom!” that creates the impression that the engine had been running all along and just decided to speak up.

The car has four operating modes; “quiet,” “sport,” “sport+” and “track.” Each of these tweaks the electronic adjustments of the magnetically variable shock absorbers, the nine-speed automatic transmission, the electric power steering, the all-wheel-drive system, the electronic stability control system and active muffler bypass valves.

An unprecedented range of adjustability in each of these areas permits the NSX to have the most dramatic personality changes since Brad and Janet met Dr. Frank-N-Furter. In Quiet mode, the NSX is as buttoned up as the young couple was upon arrival to the doctor’s mansion, and in Race mode, the NSX goes for full-on debauchery.

For younger drivers seeking a primer on the meaning of the term “understeer,” (which is when the front wheels are turned toward a curve but they slide so the car continues straight), the NSX is wonderfully instructive. The car begins in Quiet mode with abundant, safe understeer, which keeps the car from spinning around, and then lessens the understeer progressively in each mode up through “Track,” where the NSX is largely neutral.

The car’s exhaust volume also ratchets upward through the settings, and the great thing is that the driver can decide when to engage in which. So unlike too many of its competitors which force the driver to look like a preening rooster on trips to Walgreens, the NSX can creep surreptitiously out of the neighborhood in the wee hours, but still announce its presence with suitable authority at the track.

It would be nice to be able to employ track mode without disabling the stability control system, for some noisy fun that preserves the car’s electronic safety net.

An iffier electronic feature of the NSX is electric servo-operated brakes that disconnect the brake pedal from the actual brakes. In earlier, failed attempts to introduce this technology, other automakers have tolerated an utter absence of brake feel needed to communicate whether the car is responding as expected.

The NSX’s electric brakes are better than that. Indeed, at high speeds they provide a feeling of imperturbable confidence, which may or may not be warranted. Even at trickier lower speeds, when the car has less inertia and is more vulnerable to misapplications of brake pressure, the system still holds up well compared to conventional brakes. But at very low parking speeds, stopping the car can still be abrupt. The feeling is similar to that provided by some carbon ceramic brakes, which can be difficult to modulate at walking speeds.

And the test NSX was fact equipped with such brakes. But with their electronic operation, there was no possibility of feeling what the carbon brakes were doing, so any misunderstandings were an artifact of the electronics and not the ceramic brake rotors’ characteristics.

Our test car featured the optional $6,000 Valencia Red Pearl paint that could be considered mandatory because of its incredible appearance. The hue gives the NSX a sophistication that a mid-engined supercar could lack if improperly executed.

Similarly, the NSX’s exuberant lines attracted compliments everywhere the car went, typically followed by the exclamation, “That’s an Acura?!” Yes indeed it is.

It was reassuring to hear Acura’s big bet garnering such favorable comments, because after seeing the car only in the unreal world of the auto show circuit where the NSX competes for notice with Ford’s astounding new GT and various garishly finished Italian, German and English supercars, the NSX’s ability to stand up for itself was uncertain.

The adjustable suspension provides a surprisingly cushy ride and even the racing-style seats are acceptably comfy for highway cruising. Legroom for occupants’ door-side legs is always in short supply in mid-engined sports cars, but the NSX does a good enough job in this respect to prevent leg cramps on long drives.

The other thing that will prevent leg cramps is the frequent opportunity to get out and walk around while the NSX is refueling. The car’s EPA numbers are unremarkable, at 20 mpg city and 22 mpg highway. But the raison d’etre of the hybrid system is to boost efficiency, and the NSX falls well short on the highway of cars like the Corvette, which gets 29 mpg on the highway.

Further, in 150 miles of test driving, which included a few laps around a racetrack, but which was mostly highway driving to and from that track, the NSX returned 14.75 mpg, putting it in company with the V10 Dodge Viper. At that rate, strolls around the gas pumps will keep NSX occupants’ legs stretched

Acura’s goal for the NSX is to cultivate a more prestigious image for the brand that has too often relied on selling dressed-up Hondas, and the car achieves its technical objectives. With a $209,500 as-tested price, the cost alone will push Acura into unprecedented demographics.

A true conversion of the Acura brand into an authentic prestige brand would be a personality transplant on par with Pixar’s conversion of Woody from unsympathetically jealous to affable Tom Hanks good guy.