Switchbacks on the Portuguese coast put Porsche’s new roadster to the test. 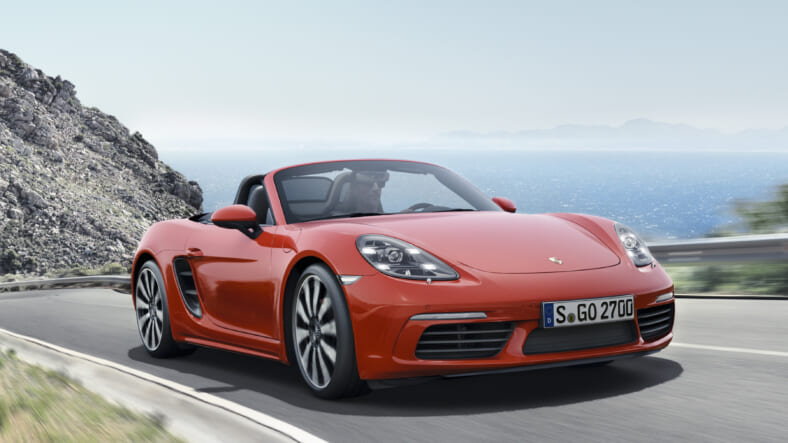 The 2017 Porsche 718 Boxster is superior in every quantifiable way to its predecessor model, primarily thanks to a more powerful turbocharged engine, stronger unibody frame and more sophisticated suspension. What was once known as the “entry-level” Porsche is now outfitted with expensive-looking detailing inside and out. There’s nothing entry-level looking about it.

This is a significant change that has evolved over time since the Boxster’s introduction in 1996. That first car’s detailing and interior appointments were notably shiny, flimsy and cheap-looking. Enthusiasts were supposed to embrace the Boxster’s minimalist aesthetic and its connection to Porsche’s corporate roots, overlooking the obvious shortcomings in a car whose price started at $40,000 but which rarely sold for that little because of the car’s extensive list of pricy options.

Each subsequent generation of Boxster has enjoyed improvements, to the point that the new 718 Boxster makes no apologies to customers expecting 911-grade appointments, with a lavish cockpit featuring the kind of premium materials, controls and switchgear the Porsche faithful and aspirants expect.

The biggest news, aside from the addition of the “718” to the Boxster’s name (it is a reference to the mid-engined 718 RSK racer that succeeded the 550, which was the original Boxster’s inspiration), is that its more muscular, turbocharged engine now has only four cylinders rather than six. This is critically important to some enthusiasts, who miss the soulful sound produced by the six-cylinder engine when it was hard at work.

It’s as if the 718 Boxster is the anti-Boxster. The original ’96 car felt cheap, suffered a floppy structure that made precise handling control impossible and wasn’t particularly fast with its 201-horsepower 2.5-liter six-cylinder engine.

Today’s Boxster feels expensive, enjoys the ability to hold its line through a turn despite bumps thanks to controlled suspension that works only because of the car’s rigid foundation, and its standard turbocharged 2.0-liter engine makes 300 horsepower, which is legitimately fast — even faster is the 350-horsepower 2.5-liter Boxster S. Both cars enjoy 35-horsepower increases over the outgoing 2016 editions.

But there’s one thing the old car did better than pretty much anything on the road, at least anything not from Maranello: it sounded wonderful. The combined exhaust roar and intake honk produced a memorable symphony.

The serious blat emitting from the 718’s exhaust will sound familiar to Subaru WRX fans, because that car also employs a turbocharged flat-four engine. Older drivers will also recall the sound of a VW Beetle, which is appropriate because that car was the foundation of the original flat-four Porsche 356. We blasted through a tunnel to capture the sound for the accompanying video.

The 718 Boxster’s sound is both purposeful and true to its roots. While it isn’t as symphonic as the six-cylinder Boxsters that preceded it, it does, however, banish the telltale “whoosh” of most turbos, even expensive ones like the Ferrari 488GTB we reviewed recently.

More importantly, Porsche’s clever engineers successfully banished a more trouble turbo symptom, the despised lag in power response between pressing the accelerator and the turbo spinning up to speed to pump up the engine’s output to its rated levels.

Here’s what happens in a regular turbo: you lift off the gas pedal and the engine’s throttle plate closes causing the turbo’s pressurized air to back up against this obstruction. This makes the turbo’s fan blades slow down as they fight against the built-up pressure. Once the turbo has slowed it takes a second for it to spin back up to full boost-producing speed. Hence, turbo lag.

The Boxster’s turbo, instead of closing the throttle plate to cut the engine’s power when you lift off the accelerator pedal, leaves the throttle open and cuts fuel flow to the engine’s injectors instead. Result: the engine makes less power, but the turbo continues to spin freely as it blows air through the engine.

Now, when you get on the gas again, the turbo is still turning at high speed and the engine immediately resumes making big power. Genius.

The turbo power blasts the Boxster S to 60 mph in just 4.2 seconds and to a top speed of 178 mph. We saw 154 mph at the end of a standing 2-kilometer acceleration run, during which the car pulled impressively and was still gaining speed quickly when we ran out of track.

It sounds like the sort of thing that could work in theory, but prove herky-jerky in practice, as the engine switches between fuel flowing and not. But while slicing up the mountain roads near Vale do Lobo, Portugal on the global press launch for the car, the 718 Boxster showed no evidence of its solution to turbo lag.

It was the same when navigating beachside traffic in town. The car’s engine responds as expected, which is better than we can say for many cars with direct fuel injection. Current Hondas, for example, jerk between “on” and “off” at low speeds, as their fuel injectors cycle on and off during low-speed driving, but Porsche has no such problems.

Ripping through the twisties did show the Boxster to be more prone to understeer than expected from a mid-engine sports car, as the Porsche pushed the front end at the limit of grip. This is a typically conservative set-up approach, but with the car switched to Sport Plus mode, I hoped it would be more neutral.

While the Boxster has been upgraded in every respect in comparison to its progenitors, it is actually more affordable than it was when the model debuted in 20 years ago as a $40,000 entry-level model.

The Boxster starts today at $56,000, which compares to a $60,000 price tag for a 1996 car in 2016 dollars. This despite a massive load of standard convenience and safety features that weren’t available at any price two decades ago. Although the Boxster is a better value than ever, it is definitely not anybody’s entry-level sports car.