We put the latest Wrangler through the wringer. 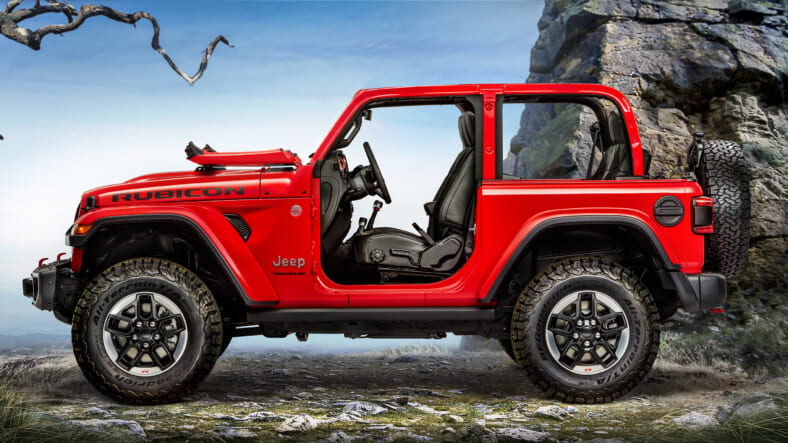 Any time a company “improves” a classic, iconic product, fans worry. Will they spoil it? Should I have gotten the old one? Why couldn’t they leave it alone?

Jeep Wrangler fans already know that the new Wrangler would incorporate aluminum body parts where the outgoing model was steel. Would the new one be wimpy because of that, they worried?

Actually, it turns out that the Jeep guys know perfectly well what is great about the Wrangler, and they aimed to make it even better than ever at things like rock crawling, slithering through sand and wading through water.

Meanwhile, they are equally aware of things that could be better, and the goal was to fix those things, reported Mark Allen, head of Jeep design. “We’ve been thinking about this for about ten years,” he said. “There is a lot of Moab [Utah, a huge off-road venue] influence. We wanted to fix things that bothered us, and we got suggestions from customers.”

Here are some of the things the Jeep team made even better for the 2018 Wrangler.

The new Wrangler weighs 200 lbs. less than before, which makes the vehicle easier to manage in all conditions. It does this with a frame that is 18 percent more resistant to twisting, as happens when one wheel is clawing its way over an obstacle while the others are on flat ground. A stiffer frame means that the springs and shock absorbers can do their jobs as intended, without unwanted interference from a twisting frame.

That frame and suspension are redesigned in a way that gets the Wrangler’s underbelly higher up, out of harms way. So that even though the wheelbase is longer for 2018 on both the two-door and four-door models, the breakover angle (that’s a measure of when the vehicle might get its belly grounded, preventing the tires from getting traction) is higher than before.

And a longer wheelbase also tends to demand a larger turning circle, but redesigned suspension lets the front wheels turn more sharply, so the 2018 Wrangler needs a foot less space to make a U-turn.

Those are still industry-benchmark Dana axles under the Wrangler, but Jeep describes the improved editions in the 2018 Wrangler as “next-generation” for even better durability than before.

We found these improvements make the 2018 Wrangler even more unstoppable than before.

The old Wrangler’s steel hood was prone to fluttering at highways speeds, so the new aluminum one is designed so that won’t happen. The fenders and doors are aluminum too, for reduced weight, while the main body remains steel.

The Wrangler’s stiffer frame reduces what engineers call “head toss,” when highway bumps send a shiver through the vehicle. We found this tendency to be blessedly reduced while traveling on Interstate highways on the way to the off-road portion of the drive.

The Wrangler now features a steering wheel that can be heated for cold-weather comfort and that now telescopes in addition to tilting, so it can be perfectly positioned for the driver instead of being sorta close to perfect.

Until now, Wranglers have used old-school doorhandles with a thumb-operated door handle. For 2018, the Wrangler joins the 21st century with contemporary pull-handle door operation that is a huge improvement, while retaining virtually the same appearance.

Maxim has been telling you the best way to enjoy a Wrangler is to strip it down to the bare essentials, and Jeep is making that even easier to do than before.

Those aluminum doors not only weigh less than the old steel ones, but they include a built-in handle for carrying them when you’ve removed them.

There are a ton of options for getting the new Wrangler topless. The conventional folding soft top’s operation is thankfully simplified. Previously, removing the side windows and folding the roof back required knowledge of a fairly complex procedure to get right. The new top is much simpler.

Meanwhile, the hard top was pretty cumbersome and heavy on four-door models. So now, instead of removing the whole thing, you can remove one manageable piece at a time.

Or, there is an available hard top that includes a power-retracting panoramic canvas sunroof that opens (while driving at speeds as high as 60 mph) nearly the entire roof at the touch of a button. This Wrangler is meant to be as topless as a French beach.

“Jeep hasn’t been known for its lighting technology,” conceded Allen. They’ve addressed that with the new Wrangler, which still has the familiar circular headlights, but now they are powered by LED technology. They include a “halo” ring to underscore their roundness even when turned off.

The 2018 Wrangler carries over the outgoing model’s 285-horsepower 3.6-liter V6 engine, which has been appreciated for its flexibility and efficiency. Its official EPA fuel economy ratings are 18 mpg city and 23 mpg highway.

But Jeep will offer a way to do better than that, with an available 2.0-liter turbocharged four-cylinder gasoline engine, with a slightly lower 270-horsepower offset by slightly higher 295 lb.-ft. torque (versus 260 lb.-ft. for the V6). It will arrive later in the year.

Not good enough? Then how about a torque-heavy, fuel-sipping diesel engine option, scheduled to arrive in calendar year 2019? Or a plug-in hybrid electric Wrangler due in 2020?

Look for 2018 Wranglers to hit dealers in the first quarter of 2018. Those same dealers are taking orders now, with prices starting at $26,995 for a base two-door and topping out at $40,495 for a four-door Rubicon. If you’ve been on the fence about getting a Wrangler, this oughta jar you loose.