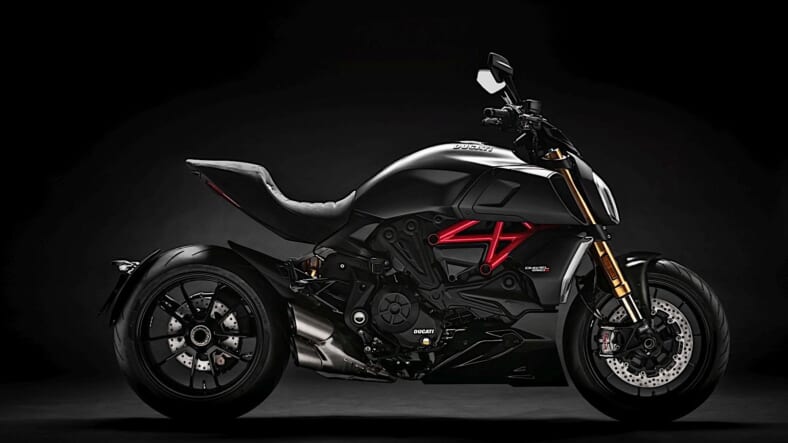 In November Ducati first revealed plans for an all-new variant of their muscular Diavel model, “combining the performance of a ‘maxi-naked’ with the ergonomics of a muscle cruiser.” Now an even more badass S version is about to hit the streets with production beginning in Bologna, Italy.

Powerful but also extremely agile, its built around the superbike-derived 157 hp Testastretta DVT 1262 (for the cc rating) engine and features a special Öhlins suspension, sportier wheels, an improved braking system and a race-bred Evo quick shift system that lets you shift gears without using the clutch.

While the standard 1260 comes in Sandstone Grey, the 1260 S can be ordered in Total Black / Dark Stealth with red highlights, marking it as a mean machine. It costs $22,995 as opposed to $19,995 for the stock version, but is infinitely more menacing and fun to ride.

The wide air intakes and signature trellis frame immediately identify it as a Ducati even when passing at speed – as if the twin-tailpipe sport exhaust didn’t give it away. A new full LED lighting system also gives it a superbike style appearance at night.

And though it hasn’t expressly been stated, we think the influence of Ducati’s parent company Lamborghini can be seen – and heard – every time the Diavel S revs its engine, sending lesser bikes scrambling to get the hell out of the way.

The Ducati Diavel 1260 S is available now, probably at a Ducati dealership near you.