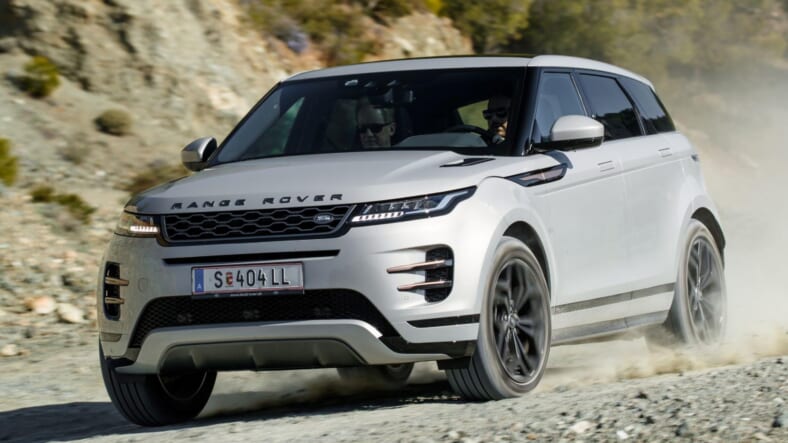 Somewhere overlooking the Aegean — a glimmering sea of turquoise below, impossibly blue and pocked with white islands — the aging Greek road decided to surrender. It gave up its already dubious asphalt aspirations altogether, and relinquished into its natural state of broken dirt.

The new 2020 Range Rover Evoque we’d been driving for a couple hours from Athens Airport drove smoothly on the black top — its compact footprint, unibody construction, AWD architecture and rigid aluminum intensive chassis offering as close to a car-like drive as you’ll find in any crossover — but now it was going to be put to the test.

Once we hit that dirt though, we barely made any adjustment in our driving considerations. Outfitted with Land Rover’s superb Terrain Response 2 system standard, the second generation Evoque calculates the road conditions every 100 milliseconds and selects which off-road program is best suited for the terrain.

Be that gravel, mud and ruts, loose sand, etc., the Evoque figures out what’s best and seamlessly shifts to that program.

Looking over my surroundings I was overtaken. The Aegean Sea glittering in the distance, the twisting cypress trees all around, the craggy cliffs pulled straight from ancient Greek paintings.

Inspired by Athena — patron goddess of all heroic endeavors — I floored it, and ran through the hills, swooping up and down in rhythm with the hill’s crest, fire burning in my belly. This shit is fun.

Even before this trip, the Evoque had taken us to some truly special places. That last time we drove one — the convertible Evoque at that — it was through a knee-deep powder snow course on top of the Alps in Courchevel, France. It felt like living a Frank Frazetta oil painting, with a rust orange convertible SUV subbing in for frost giants.

This journey cutting from Athens to the Peloponnese port city of Nafplio just might surpass that epic adventure. This ancient nation is the cradle of western civilization, after all. The birthplace of democracy and philosophy.

I’ve wanted to visit it since being obsessed with the mythos of Hercules and Zeus, Medusa and Poseidon. And more recently, Iliana Papageorgiou and ouzo. Our final destination of the Amanzoe resort — remarkable even among the legendary Aman resort group — only crowned the Odyssey.

Despite the economic collapse, the nation of Greece is still eye-watering in its beauty. Every corner seems to evoke some lost memory, or at least a scene from Clash Of the Titans or The 7th Voyage of Sinbad recalled from your foggy youth.

When you roll up to the Amanzoe — a modern interpretation of classic Greek design, rife with Doric pillars, endless marble and shimmering pools — the beauty is overwhelming.

Yet, the Evoque holds its own — even among these glorious backdrops. The original Evoque was already a landmark vehicle, birthing the segment of actually beautiful small crossovers once ruled by the likes of the sterile RAV4s and CR-Vs of the world.

It single-handedly made the prospect of owning a small SUV acceptable for guys who don’t buy their jeans at Costco.

Because of its watershed design — winning the prestigious World Design Car of the Year in 2012, as well as North American Truck of the Year, and Motor Trend and Top Gear SUV of the Year — Land Rover Chief Design Officer Gerry McGovern opted to make the second generation Evoque more of an evolution in design rather than a revolution.

Since Land Rover have sold more than 800,000 Evoques since it hit showrooms, there’s little reason to reinvent the wheel.

“Clearly we started the trend of the compact stylish, design-oriented SUV, and the Evoque is an iconic vehicle and we wanted to maintain what’s good about that — which is that iconic design,” explains CEO of Jaguar Land Rover North America Joe Eberhardt.

“But then address some of the issues or challenges we had in terms of roominess in the back. So we added to the wheelbase, giving you more rear knee room and trunk space, which really were the two issues that our customers were asking for.”

Was there much deliberation in radically changing its design?

“There was a discussion, around should it be really revolutionary or evolutionary,” admits Eberhardt, “but because of the iconic nature of the design it was really a very quick decision to evolve it instead of completely change it.”

Not that it’s identical to its predecessor. The rising beltline, floating roof and handsome proportions remain, but some major external changes are implemented like flush door handles that pop out at approach, thinner Matrix-Laser LED headlamps and a new rear-end with Velar-like horizontal light bar, larger spoiler and wider tailgate for easier loading and unloading of cargo.

The interior receives the biggest advancements however, in the form of the Touch Pro Duo MMI which debuted on the Velar and is making its way across the Range Rover line-up. Comprised of twin 10-inch touchscreens with two dials housing tiny OLED screens, the curve of minimalist glass is a quantum leap from the last generation Evoque, with its glossy black frame that disappears the bright, crisp screen into a clean swoop of obsidian when the vehicle is powered off.

This is yet another example of designer McGovern’s reductionist mandate, removing all unnecessary clutter both internally and externally. There’s also a number of new sustainable materials, including fabrics made of eucalyptus and recycled plastics.

So it’s not surprising that the Evoque will use the same offering of JLR’s 2.0-liter Ingenium engine: the P250 with 246-horsepower, and the P300 tuned up to 296-horsepower. The turbocharged inline-four cylinder powerplants both come mated to a smooth nine-speed automatic transmission, and Land Rover’s excellent AWD comes standard across the fleet.

One small caveat is for America the Evoque will also feature a mildly electrified version of the P300 augmented with a 48V architecture, complete with lithium ion battery pack slipped under the cabin floor (it does not take up any valuable cargo space).

Although the electricity will not juice total power output, it will take over motivation for the Evoque under 11 mph when the ICE engine will shut off, and will allegedly help with acceleration to fill in as the turbo winds up. Regenerative braking will keep the battery packs full.

Unfortunately (and strangely, given that usually OEM’s want you to drive their better engine) we only drove the more tepid P250. Even more strangely, it was the mild hybrid version of the P250 which will not even be available in the US.

But our experience with the engine was mostly positive: its got enough juice to overtake slower traffic, but we were hesitant to do so going uphill. Second, you have to floor it for a full 1-2 seconds before it revs to the point of waking, although that can be accelerated with a quick downshift. If we had any complaint, it’s that the Evoque could offer a more powerful motor — which perhaps the P300 supplies.

The road to Amanzoe was stunning, and at times treacherous— complete with a crossing of canal several hundred feet below us.

The bridge was so old and rickety signs warning us not to cross were staked right before we ventured forth. But Range Rover promised us it was safe, so we inched forward while rescuers in harnesses waiting for us on either end. After this event the bridge was to be demolished, so there was definitely a couple moments of high tension.

What this says about the Evoque’s powertrain, AWD capability or Terrain Response 2 system I have no idea, but it certainly added some heart palpitations to our Odyssean journey.

The Evoque also updates the usual 360 degree “birdseye” camera with what they call “ClearSight Ground View” — a virtual vision of what’s under the car stitched together from all the cameras and projected onto the upper screen.

ClearSight Ground View is especially useful if you’re off-roading, or cresting a hill and not able to peek over the hood, allowing the driver to see what would normally be pure guesswork (and anxiety inducing).

The traditional rearview mirror has also been augmented with a crisp HD display fed from the rear-facing camera, so the driver can see what’s behind him even if there’s cargo obstructing the trunk.

If you don’t feel comfortable looking into a screen (or want to ensure you’re still a handsome bloke), you can push a tab and it turns back into an old world mirror.

When the Evoque first made its glorious debut on the worldwide stage way back in 2011 it was a creature all its own: a luxury compact SUV that prioritized design in a most milquetoast crossover segment, stiff arming the gelded competition into the dirt.

But a lot has changed in eight years — luxury SUVs are now the hottest segment in the market, and similar vehicles that put a heavy emphasis on luxury and design have popped up from everyone from Alfa Romeo (Stelvio) to Volvo (XC40) to even from within the family (Jaguar E-Pace).

Options from Infiniti and Lexus have grown considerably more handsome, and all the Germans have regrouped with a sundry of stylish product, all of which challenges the unique position the first-gen Evoque once held in the marketplace.

But the Evoque still looks better than almost all the above, and handles off-road duty better than subcompact SUV we’ve yet tested — so it should retain its place at the top of Olympus. CEO Eberhardt seems to agree.

“We’re confident given that since it retained everything that made it successful in the first place, and then improved upon all the functional elements,” he argues, “I think it should do at least as well as the old one.”