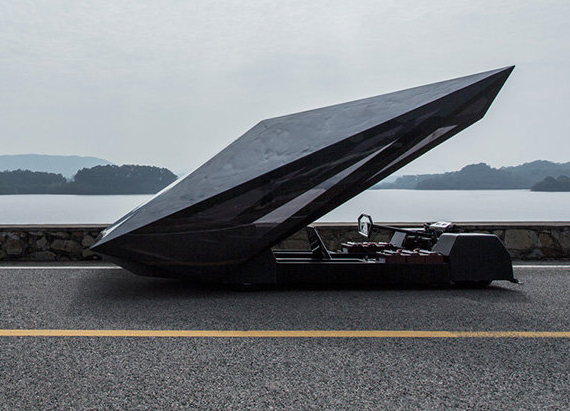 What’s this offbeat modern art sculpture sitting smack in the middle of the road? Did a B-2 stealth bomber lose its wings and fall from the sky? Did Will Smith’s alien craft from Independence Day somehow make it to the highway? Neither of the above. It’s apparently the award-winning Lo Res concept car.United Nude began the design process with a classic Lamborghini Countach—like the one driven by Susan Anton and Catherine Bach in the infamous opening sequence of Cannonball Run—then lowered the 3-D resolution of the image gradually, until it took a completely abstract appearance. Sort of like a ThinkGeek “8-bit” tchotchke, but taken to the extreme with a six-figure supercar.

The odd thing about this awkwardly polygonal polycarbonate automobile is that the two-seater actually does drive. Then again, it’s got no doors, and an electric engine that tops out around 30 MPH. Win some, lose some.At those speeds, it’s 1) more just a proof of concept meant for display purposes and 2) tough not to picture is ambling down the street with War’s famous “Low Rider” song playing in the background.