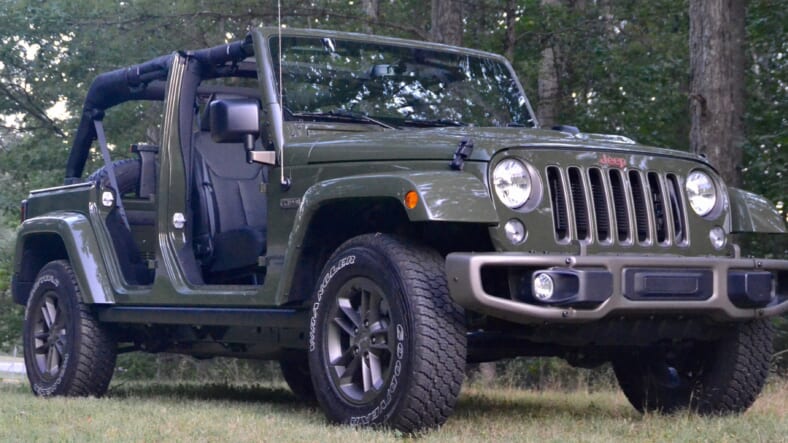 “Nice Jeep.” It was an innocuous enough compliment of my 2016 Jeep Wrangler Unlimited 75th Edition, but the circumstances illustrated the social appeal of Wranglers with the top and doors removed. See, I was stopped at a stop sign and a guy crossing the street made the comment.

Have you spoken with many pedestrians from behind the wheel lately? I thought not. But when stopped in a wide-open Wrangler, you’re mingling with everyone like you’re standing in the middle of the street.

In the Wrangler, you are gloriously defenseless to bioweapons. Also to friendly pedestrians. And fellow Wrangler drivers who wave when they see you are serious enough to run yours stripped naked.

You can smell the air and feel the temperature change, as when riding a motorcycle, but without the interference of protective helmet, jacket and boots. Just hop into the Wrangler and go. If it doesn’t quickly fill up with attractive people, you’re doing it wrong.

On the road air swirls around the windshield, but the front seats are fairly placid—save for the occasional side gust from a passing truck that tugs at your hat.

This 75th-Anniversary Wrangler is a pricey one, with a $48,630 bottom line. But the base price is $34,795 and a base Wrangler looks just as good naked as a top-of-the-line model.

Some of that equipment is suspect on a vehicle like this anyway. Should a wide-open Wrangler really have thermostatic climate control? Shouldn’t its heater be something like a bonfire? Or maybe a Coleman camping heater?

The Alpine satellite audio system admittedly sounds great, with the punch to overcome wind and tire noise to be heard even at highway speeds. But with the roof off, that upturned subwoofer in the cargo area looks exactly like a rain gauge. (It probably won’t sound as good after a couple times collecting the overnight rain.)

It is hypocritical to note while waxing nostalgic about the absence of comfort features that the presence of electric seat heaters is a wonderful inclusion. But they are invisible, and they widen the range of operating temperatures when you can drive the Wrangler without weather protection filtering your experience.

A somewhat surprising—but obvious—result of removing the Wrangler’s roof and doors is that it is noticeably more sprightly, having off-loaded a couple hundred pounds of bodywork. The Wrangler’s 285-horsepower V6 engine never feels overburdened, but with four doors and a fiberglass roof installed and four adults aboard, it is distinctly less lively and more prone to downshifting its five-speed automatic transmission.

We can safely bet that the all-new Wrangler arriving in 2018 will have many more gears in its automatic transmission. We can only hope that it will also include the six-speed manual transmission that is currently standard equipment, but that was sadly not installed on our test Jeep.

Rowing manually through the gears would have helped make driving the Wrangler even more engaging, even if it doesn’t require the kind of sheer effort experienced in the ’79 Volkswagen Beetle we recently rented from Turo.com.

But there isn’t much that could have made piloting the Wrangler, with its doors and roof removed, more immersive. Wranglers have been selling at a record pace in recent years, specifically because it is the sole surviving machine that meets modern government standards while delivering these thrills.

Yet inexplicably, virtually none of the other Wrangler I encounter are running al fresco. Driving the Wrangler wide open is to experience IRL the fantasy that sells so many dreary, soccer-carpooling poser SUVs to drivers too vain to buy the van they should have gotten.

The thinking for being able to strip all these normal-car parts off the Wrangler is to make it better for off-roading, but it is a blast to experience on-road too. You probably don’t want to undertake a six-hour highway drive on a 70 mph Interstate, but at a more sedate pace, the Wrangler is pleasant.

The knobby tires sing quietly at speed, so their noise isn’t intrusive, and the Wrangler’s steering delivers that heavy feeling characteristic of solid front axle vehicles that spawned the “drives like a truck” criticism.

The road glides by just to the driver’s left, with road stripes and curbs and all sorts of road geography that has been sort of theoretical suddenly up close and high-definition. With the door gone, the road is even more immediate than when driving a sporty almost-car like the Polaris Slingshot. Driving a seaside concession go-kart is the closest analogy, but you’re in public rather than on a closed circuit.

The whole doors-off, roof-off thing gives serious off-roaders better visibility when navigating rock-strewn paths like the Rubicon Trail on the California-Nevada border. That turns out to be just as beneficial squeezing between parked Chevys in the urban jungle as squeezing between boulders in the mountains.

And with no doors to swing open, when the Wrangler squeezes into a too-narrow parking space created for the subcompact cars that no one actually drives, it is easy to slide out of the Jeep because the door isn’t in the way. Easy Peasy.

So why don’t more Jeep owners keep their 4x4s in full immersion mode more often? It is some work to take all that hardware off, and you need someplace to put it all once it is removed. The garage isn’t a great solution, because you need that bay to be clear for parking the Wrangler when it looks like rain.

With a garage at home and covered parking at work, you could easily get by with just a teeny bikini top to throw over the front seats in case of a squall en route.

The doors are pretty easy to remove: two nuts undo the hinge pins, unclasp the wiring connector for the window and slide the nylon restraining strap off its anchor and the door lifts right off. The Wrangler’s mirrors mount to its doors, so you’ll need the Mopar replacement mirrors that bolt to the base of the windshield to drive without doors.

The Freedom Top panels over the front seats also come right off and are easily stowed. But the hardtop itself is big, heavy and cumbersome. Removing it is a matter of removing eight Torx head bolts, which is easy, and then lifting off the roof and moving it someplace safe, which is not. But if you take it off May 1 and reinstall it Sept. 30, which seem like reasonable dates here in the mid-Atlantic, that gives you five months of skinny dipping joy in every drive.

Buttoned up for winter, the Wrangler disappears, looking like any other suburban minivan replacement. But you can always get the Freedom Top panels out of the way in a matter of minutes and maybe even ditch just the front doors for a weekend with a pleasant weather forecast. Nice Jeep, indeed.