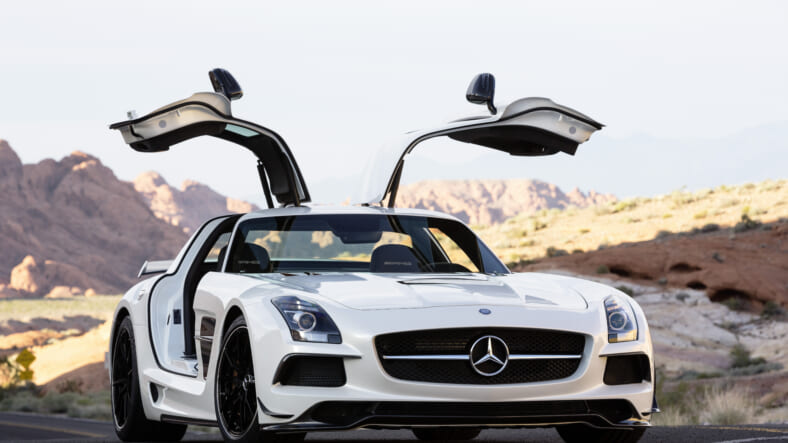 Flip-up doors may sometimes be referred to as “Lamborghini doors,” but Mercedes-Benz was utilizing top-hinged gull wings decades before Lamborghini’s Countach concept debuted its scissor-style hinges at the 1971 Geneva Motor Show.

1. 1952 Mercedes-Benz 300SL racerMercedes innovated with its first gull wing door in 1952, when the company introduced the 300SL race car.

3. 1969 Mercedes-Benz C 111 The next new gull wing Mercedes was the first of a series of prototype test cars, the C 111 family that debuted in 1969, painted, as was customary for Mercedes’ test vehicles, in safety orange. The car was so fashion-forward that was used it in a 2015 TV commercial.

5. 1991 Mercedes-Benz C 112 The company ultimately launched a successor to the fabled C 111 test cars with the C 112, an exotic supercar meant to boost Mercedes’ sporting credentials just as it was re-entering motorsport. Alas, the C 112 was never manufactured for sale.

6. 1997 Mercedes-Benz CLK GTR As Mercedes emerged from its motorsports dormancy, it aimed for success at the 24 Hours of Le Mans. The rules at the time required production cars for the race, so serious entrants built race cars for the street, like the V12-powered CLK-GTR. Curiously, this car used Lambo-style scissor doors rather than traditional gull wings. Mercedes built 25 of the cars for the street to meet the requirements for racing.

8. 2013 Mercedes-Benz SLS AMG Finally, after a half-century hiatus, Mercedes brought its iconic gull wings back into production with the rumbling SLS AMG. This car has been superseded by the conventionally-doored AMG GT, but with this recent production history, we can hope for more Mercedes gull wings in the near future.