The 2018 Lincoln Navigator Is a Road-Dominating Behemoth 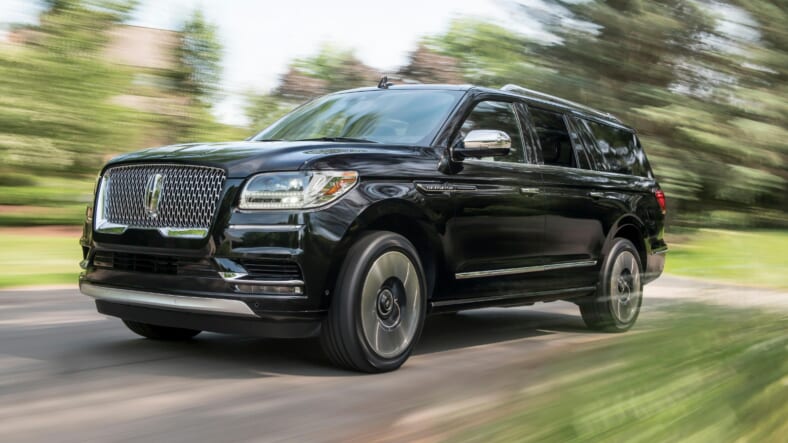 In the latest commercial for the all-new Navigator, the fourth generation of Lincoln‘s flagship SUV, Matthew McConaughey thinks he’s a god. Not the God, mind you, but just your typical, everyday supernatural entity with the ability to control nature.

After spending a weekend with the most luxurious American SUV ever made, we totally get how the divine Mr. McConaughey feels. Just named the North American Truck of the Year at the Detroit Auto Show by a jury of nerdy car journalists (sorry guys), the Navigator is truly a game-changer for Lincoln. And when you’re behind the wheel, you feel like you’re capable of just about anything.

Powered by a twin-turbo 3.5-liter V6 that delivers a hefty 450 horsepower and 510 lb.-ft. of torque, the eye-catching beauty also offers the most towing capability in its class—up to an incredible 8,700 pounds. (Not that the folks who will be buying this thing will be doing much towing, we reckon.)

Even before stepping in, your passengers will know they’re in for something special. Upon approach, the Lincoln logo on the grille illuminates. Then, LED lights up front and in back gently engage. Finally, a luminous Lincoln “welcome mat” appears beneath the doors. Baller.

While we’ve driven more powerful SUVs—hello, Bentley Bentayga!—the Navigator has plenty of oomph. (Starting at around $75K, it’s also almost $200,000 cheaper than that British beast.) We never lacked for pickup in our drive from Manhattan to Long Island, thanks in part to a 10-speed transmission that ensured the vehicle was always in the right gear.

We enjoyed clear skies during our time behind the wheel, but we’re confident Lincoln’s drive mode technology—easily controlled with the twist of a knob—would have kept us on the straight and narrow in the event of any rain, snow, or Bomb Cyclones.

Oh, and thanks to the efficiency of that forced-induction six, milage isn’t awful; we averaged about 20mpg between stop-and-go city traffic and the shockingly wide-open LIE.

No luxury SUV can be named one of the best in the world without an appropriately swank interior. Well, no problems here. The inside of the Navigator is truly cavernous, with leather, chrome and wood everywhere you look. A striking 12.3-inch  infotainment system incorporates the same groundbreaking digital light processing technology used in movie theaters. Unlike lesser systems, it’s visible both in pitch black and under the harshest light.

Up front, the driver and whoever called “shotgun” luxuriate in seats offering massage, heating and cooling functionality—and that can be adjusted up to 30 different ways. Ten power outlets, wireless charging and standard Wi-Fi keep everyone connected, and an available rear-seat entertainment system allows those in the back to wirelessly stream content to either of the 10-inch adjustable screens mounted behind the front seats.

Finally, the third-row seats are power reclining—and all the seats fold totally flat—in the event you need to use this massive SUV to move something other than human beings.

Or, in our case, if you just feel like hanging out in a space that’s bigger than a New York City apartment.