The “Sub Zero” Yamaha is his latest stone-cold creation. 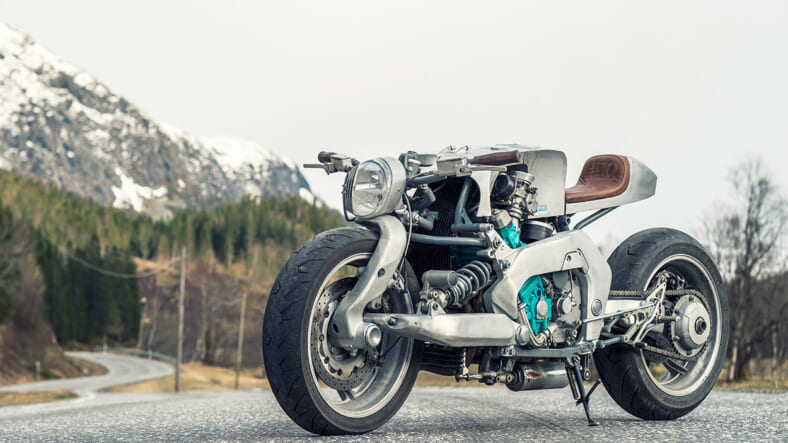 The little town of Velfjord, Norway near the Arctic Circle is very remote, but Roel Scheffers is quickly putting it on the map for his super-cool custom motorcycle creations like this “Sub Zero” Yamaha GTS 1000.

Dating from the mid 90s, the GTS 1000 is one of the most complex bikes the Yamaha’s archives with electronic fuel injection, ABS and a radical front suspension system, all of which were catnip to Scheffers, reports Bike EXIF.

To kick things off, he grafted on the swingarm of a Honda VFR 750, and installed a short Buell ‘pull shock.’ For the front wheel now he blended elements from Honda NSR150 SP and VFR750 wheels.

To keep the bike low—a mere 32 inches high—every available space is filled with relocated parts. The radiator sits between the front suspension and the engine, and the oil cooler has been modified to sit beneath the front swingarm.

The engine isn’t stock either with Scheffers squeezing a 136 horsepower FZR1000 engine into the GTS’ frame, wedded to a custom exhaust and a tweaked muffler from IXIL. On the front end you’ll find a modified Harley-Davidson headlight with mini-grill,

“Due to the low center of gravity, it’s very stable on the road and it rolls very cleanly,” Roel tells Bike EXIF. “The bars are wide enough for a good grip, and the footpegs are placed way back—so your knees aren’t at an uncomfortable angle.”

He’s already started on his next project, a Suzuki GT750 two-stroke that will get the complete ‘Scheffersstyling’ treatment. We can’t wait.