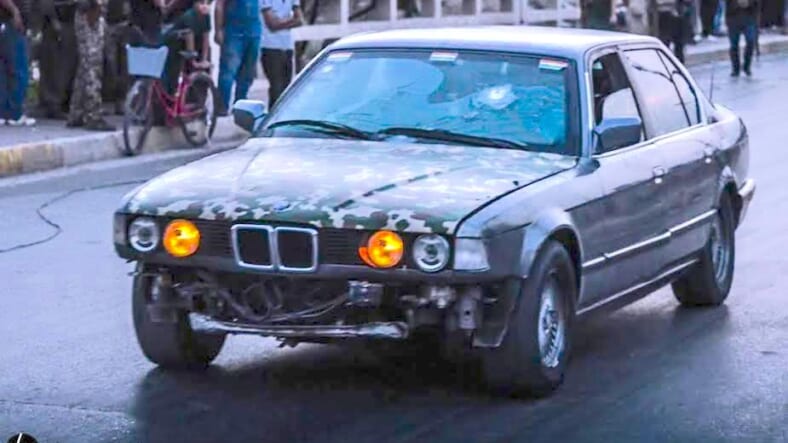 The BasNews independent news agency from the Kurdistan region of Iraq is reporting that a Peshmerga fighter was able to save dozens of lives during an ISIS attack in the Kirkuk province using an armored BMW 7-Series sedan to evacuate victims.

“After we arrived at the scene, we saw many wounded individuals among the security forces and civilians and no one was able to approach them due to the IS snipers,” said driver Ako Aburrahman, known as Ako Duzi, who is a Kurdish Peshmerga solider fighting on the Tuz Khurmatu frontline in southern Kirkuk. “Therefore we decided to help those wounded people since bullets could not penetrate my car.”

Ako drove victims to a nearby hospital all day on Oct. 21 and late into the night, eventually recovering as many as 70 shooting victims. One died because of the delay in getting him to the doctors, but the rest have survived thanks to Ako and the armored BMW that he bought for $9,000 in June.

CNN reports that he bought the bulletproof ride because he thought it would come in handy in the war-torn region:

After shopping around, he settled on a bulletproof BMW, and paid $10,000 for the early 1990s model at a car auction.

“My friends were very happy when I bought the armored car,” he tells CNN. “We started driving in it to the front line near Kirkuk, not worried about ISIS drive-by shootings or roadside bombs.”

Abdulrahman, 32, lives with his wife and four children in Taza Khurmatou, some 23 kilometers south of Kirkuk.

The Bulletproof Beemer was struck by about fifty bullets and was eventually stopped as a result of the damage. Surely the dozens of victims saved will agree that Ako’s purchase of the car was money well-spent.

With it gone, they may need to resort to home-brew armor like these badass rides.