Beat the traffic with this luxury ride in the sky. 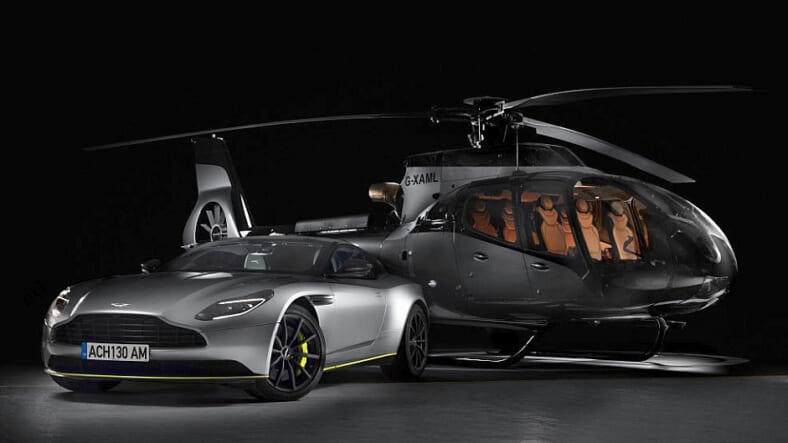 In the real world, Aston Martin’s James Bond-beloved sportscars can do just about anything except fly.

Aston decided to rectify this problem—in a way—by partnering with Airbus to create a new helicopter with the high-end automaker’s legendary combination of luxury and power, the ACH130 Aston Martin Edition.

This relatively new partnership between Aston Martin Lagonda and Airbus Corporate Helicopters (ACH) isn’t an experiment—designers from both companies have merged their complementary aesthetics to create a product mirroring the Airbus commitment to excellence with the Aston Martin reputation for handcrafted elegance.

Choppers have long been the most utilitarian of vehicles, akin to the jeeps of the sky, but the ACH130 helicopters contain style elements familiar to Aston Martin lovers that include, according to a joint press release, “Aston Martin signature elements, starting with the iconic Aston Martin wings, which are embossed onto luxury leather features, tastefully positioned throughout the cabin.”

The very first ACH130 sports a Stirling Green external design. The color scheme does an exquisite fade from glitter-spiked dark gray to “jet black” on the undercarriage, and the cowlings have been accented with what the Airbus release calls “Skyfall Silver.”

Anyone lucky enough to be familiar with the interior of the Aston Martin DB11 will recognize the ACH130’s seats, which have the same kind of detailing and leather options in general.

Airbus says that “these special edition helicopters will have a plaque included on the instrument panel which shows the partnership logos, the registration of the aircraft, the edition number and the owner’s name, should they wish to have it included.”

Today we’re proud to reveal the first images from our partnership with Airbus: the ACH130 Aston Martin Edition. The stylish special edition of the ACH130 helicopter comes equipped with a range of four interior and exterior designs generated by Aston Martin. #AstonMartin #ACH130

If you’re already in the position to afford a helicopter in the first place, might as well go for broke, then.

Purchased choppers will be delivered in the first quarter of 2020, and the ACH130 Aston Martin Edition is available for order now.