This was a high-powered test drive fit for 007 himself… 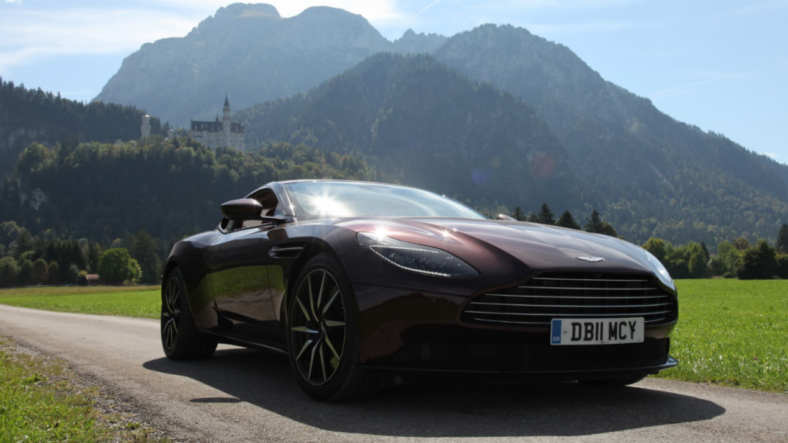 Atop and within a barren mountain peak of granite, half-underground, half-protruding over the cliff, capped and cushioned by solid rock, it sits. Menacing and awesome, the modernist design of concrete and glass is exactly what you’d expect a Bond villain’s lair to look like. Remote, secure, brutal and beautiful, with commanding views forever, it’s only accessible by a half-hour gondola ride from the narrow Ötztal valley below.

This is the 007 Elements. It’s not a museum, according founder Jack Falkner, but a cinematic installation. This is where the most recent James Bond movie, Spectre, was filmed and, as you’d expect, the location here in the Tyrolean Alps of Austria is just spectacular.

That’s always been one of the signature appeals of the 007 stories – the exotic locales playing host to the adventures of the rakish British spy. James Bond’s creator, Ian Fleming, was no stranger to the Tyrol. As a young man Fleming went to boarding school, learned to ski and, yes, had sexual liaisons in Kitzbühel, a glamorous ski town a few valleys away from here.

The Alps is also where Bond’s parents died in a mountain climbing accident, leaving him an orphan. So these mountains, and the Tyrol in particular, are the cradle that nurtured the most famous secret agent in the world.

In keeping with the spirit of James Bond, I’ve decided there’s really only one way to properly travel to 007 Elements—in an Aston Martin.

Just as Sean Connery famously drove his 1964 Aston Martin DB5 across the Swiss Alps in Goldfinger, I have the incredible privilege of driving its worthy successor, the 2018 Aston Martin DB11, across the Austrian Alps. Endowed with more than 500 horsepower, this twin-turbocharged British supercar is capable of reaching speeds of nearly 190 mph and accelerating from 0-60 in just four seconds. Muscular and refined, fast and luxurious, it’s the ultimate grand tourer befitting the ultimate secret agent.

007 Elements only just opened this summer and, as a feat of engineering, the architecture and setting alone are reason enough to visit. Chatting with Falkner over a drink in the multi-star Das Central Hotel (also owned by him) in the picturesque resort town of Sölden, Falkner tells me the materials for much of the mountaintop structure had to be brought in by helicopter. No surprise.

And in the winter, with blizzard-force winds swirling around the peak, many construction workers had to be tethered for safety. Again, no surprise for a Bond-worthy fortress.

As if Q had helped engineer it, no detail was overlooked in the creation of Elements. Even the gondola that whisks visitors several thousand feet up the mountain plays theme music from past Bond movies, perfectly setting the mood. Inside the building, in the caverns burrowed into the mountain, visitors are treated to graphic displays, movie clips and cool – even legendary – memorabilia and ephemera from past Bond movies, like Daniel Craig’s Omega Seamaster, Scaramanga’s golden gun, or the Land Rover Defender from Spectre, and so much more.

Better still, the avant-garde all-glass building (where Bond meets Dr. Swann, daughter of the villain Mr. White) sits outside Elements on the slope of the mountain and now serves as a restaurant. With views that reach as far as the Dolomites in Italy, the panoramic vistas from your table can only be described as epic.

Unlike visiting a museum, a visit to Elements is experiential. It’s the whole package – the arrival, the location, the history, the building, the effects, the views. There’s a complete immersion into the experience that’s unforced and totally enjoyable.

And if you happen to have 007’s preferred supercar on hand, over the mountain in the next valley is the famed Rettenbach Pass where Bond chases the Land Rovers in an airplane. This narrow road snakes up the mountain with a series of hairpin curves to the top of a glacier and Europe’s highest tunnel, which, by the way, at over one-mile long made for the greatest sound chamber like, maybe ever.

Completely void of traffic, I was duty-bound to take the DB11 through this tunnel five or six or times, blasting through the gears on the paddle shifters, unleashing baritone screams from the AMG-tuned engine, filling the cavern with a crushing symphony until my face was permanently seared with a smile. If only I could’ve made that noise my ringtone…

Embracing the ethos of all or nothing, I head to another famous high-altitude pass just up the road – the Timmelsjoch. Not far from where Ötzi the Iceman was found frozen in a glacier from 5,000 years ago, near the summit lies a new motorcycle museum and restaurant called Top Mountain Crosspoint.

Owned by Attila Scheiber and his twin brother, this too is an incredible example of modern design that houses a remarkable collection of over 200 vintage motorcycles. After a personal tour and gourmet lunch al fresco with Scheiber, he sends me through the toll booth and onto the Timmelsjoch Pass (also owned by him and his brother).

Passing over what seems the roof of Europe, the road crosses into the South Tyrol, or the German-speaking part of Italy, and zig-zags down into one of the most beautiful alpine valleys imaginable. It’s a 3D screensaver of steep green pastures, log chalets, waterfalls, wildflowers, bells clanging on grazing cows – the only thing missing is yodeling.

It’s no surprise to learn that this narrow route through the mountains is popular with motorcycles and sportscars. No matter how many Audi R8s or Ferrari Spiders are on the road, the Aston Martin turns heads. Here, not far from the birthplace of Porsche, straddling the homeland of German and Italian engineering, the British sportscar makes a distinct impression. Just like Bond himself, the DB11 cuts an impressive figure with conspicuous finesse.

The whole experience feels like something out of a Bond movie and that’s the magic of this weekend. From the postcard villages and glacier-covered mountains, to the 007 Elements and Top Mountain Crosspoint installations, to the dizzying roads and superfast car, it’s a Bondian dreamscape.

Fleming may have understood the impact his experience in the Alps had on him but he never lived long enough to fully realize the impact his fictitious alter ego would have on the world. Somehow the very existence of this special region, a juxtaposition of severity and beauty, tradition and modernity, is the perfect embodiment of 007. England may be the literal home of James Bond but Austria is his spiritual home, and it beckons.

Jared Zaugg — entrepreneur, author, consultant — can usually be found at the intersection of lifestyle, motoring and culture. Follow him at @jaredzaugg.