Review: The 2017 Aston Martin DB11 Is a Glorious Reboot

Here’s why the DB11 could be the supercar that saves Aston-Martin. 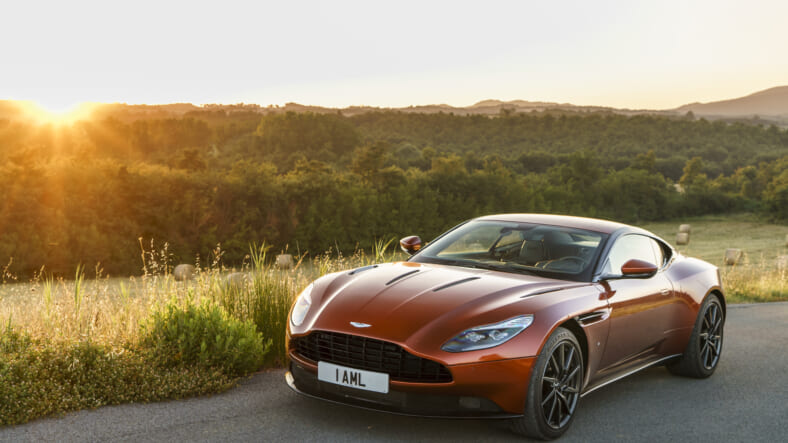 What would Lamborghini be today if it had never introduced the Gallardo, a car that proved to be the brand’s best-selling model ever? A faded sports car constructor, trading on a name built by old models like the Miura and Countach.

Aston Martin now finds itself where Lamborghini was when it introduced the Gallardo. The new Aston Martin DB11 is the most important car in the company’s history, according to president and CEO Andy Palmer. And he’s right.

The DB11 aims to energize the British brand whose reputation was built on old models like the DB5 and its iconic appearances in James Bond films. Not that it has always translated into big sales: In 104 years of existence, Aston has built just 80,000 cars. Ferrari might have made that many in the last decade alone.

To significantly expand on its relatively small presence, Palmer has devised a “Second Century Plan” for Aston that sees the company expand into new segments with models like the upcoming DBX crossover SUV. But to fund that expansion, Aston must first sell a lot of sports cars. Enter the $215,000 DB11, Aston’s would-be Gallardo.

The Gallardo succeeded by capturing everything people liked about Lamborghini, while eliminating all the Italian idiosyncrasies they didn’t like. It had the menacing, angular, insect-like styling and a thrilling engine note, but was built on a modern, crisp-handling chassis and equipped with reliable modern electrics. It was a license to print money, a device Aston could sorely use right now.

The DB11 is similarly faithful to Aston’s design language, looking the part without becoming a tribute car. The aim in designing the DB11 was to strip away the non-essential, according to designer and chief creative officer Marek Reichman. “Pure and simple is one of the hardest things today, in this world of regulation,” he said.

The car features a brushed aluminum roof strake running from the base of the windshield to the base of the rear window, tying the front to the rear visually. Then there’s the rear spoiler. There isn’t one.

A car with the DB11’s 200-mph top speed needs to manage airflow to ensure that it doesn’t launch into the sky at such absurd velocities. which is why ultra-high-performance cars are customarily fitted with various wings and dive planes and other aerodynamic accoutrements.

What, then, permits the DB11’s smooth flanks that preserve Reichman’s purity and simplicity? It is the movement of air through the body rather than over it. The front takes air in from the wheel wells and ejects it out the vents in the front fenders, imparting a swirl on it that Aston brands “curlicue,” to help keep the front wheels planted.

At the rear, internal ducts inhale through vents at the trailing edge of the side windows and then shoot it out through jets at the rear of the trunk lid, creating an invisible spoiler made of a wall of high-pressure air. Aston terms this system “AeroBlade.”

As insurance, a small flap automatically extends about an inch from the trunk lid at high speeds to help ensure the necessary stability. This low-key aero tool remains discretely tucked out of sight most of the time and is barely noticeable even when deployed.

It is important to deliver the goods, and the DB11’s 600-horsepower twin-turbocharged 5.2-liter V12 engine does just that, accelerating the car to 62 mph in 3.9 seconds as well as achieving the aforementioned 200 mph.

This is the most powerful engine ever in a production Aston Martin (which excludes limited edition specials like the One-77 and Vulcan, for example) and its prodigious output is made possible by the miracle of forced induction.

Turbochargers, however, are an anathema to the Aston tradition of rich-sounding six- and 12-cylinder engines, because the turbines clog both the intake and exhaust tracts and obstruct the escape of engines’ appealing sounds.

Aston engineers have nevertheless been able to preserve most of the DB11’s V12 sound, and there is a complete absence of the whistling tea kettle sound from the turbos that mars the experience of driving the Ferrari 488 GTB.

The engine is derived from the previous naturally aspirated 6.0-liter V12 and is still built under contract at previous Aston owner Ford’s Cologne, Germany engine plant. Its character continues to be smooth as before, but thanks to the power and invisibility of its turbochargers, is even better now.

The all-aluminum chassis beneath the DB11’s svelte body panels is equally impressive. Replacing the DB9’s old 2003-vintage Tinkertoy-like assemblage of cast joints connected by extruded tubes with a more sophisticated array of pieces yields a 25 percent improvement in stiffness.

At the same time, Matt Becker joined Aston from renowned suspension and handling experts Lotus. The new vehicle engineering director specified springs that are 10 percent softer than before, and mounted the rear suspension to that it is deflects 70 percent less side-to-side to keep the car on track, but permits 70 percent more deflection to the rear. That helps cushion the blow when hitting a pothole.

The result is steering that is far more accurate and precise than the old DB9’s setup, which never quite seemed to find the driver’s intended line. Weight has been shifted rearward in the car too, aiding in turn-in so the DB11 feels crisper and more responsive while it is doing exactly what you wanted.

Becker also ensured that the shock absorber damping was dialed in to accommodate the softer springs, and the programming for the electronic differential and the electronic stability control system give the driver the necessary feeling of control.

There are multiple settings for the various control systems, but Aston’s new technical partner Mercedes-Benz supplies the electronics and unfortunately only three settings are possible with their hardware. This is unfortunate, because while “GT” and “Sport” mode provide suitable to their tasks, “Sport Plus” would be better labeled “Drift Mode.”

Driving hard in Sport Plus mode causes the DB11’s tail to slither unexpectedly as a result of the differential’s power distribution, making “Sport” better-suited for spirited driving, even though the active shock absorber settings of “Sport Plus” would be better. Becker admitted to preferring Sport mode himself.

Power reaches the rear-wheels from the engine through an 8-speed automatic transmission that can be shifted manually using the steering column-mounted aluminum shift paddles.

Sliding your finders over these as the steering wheel whirls past provides a satisfying sense of connection not typically possible in automatic cars, and the ZF transmission eyeblink-quick gearchanges in response to a click of the paddle underscore the impressive progress that has made conventional automatic transmissions every bit the equal of touted new dual-clutch transmissions such as Porsche’s PDK.

A couple days in the DB11’s saddle reinforced the impression that Aston has succeeded in producing exactly the car they needed to build. It is true to the brand’s heritage without being imprisoned by it, and it is fully contemporary in terms of the mechanical bits beneath its beautiful skin. Make mine the Cinnabar Orange of the test car.