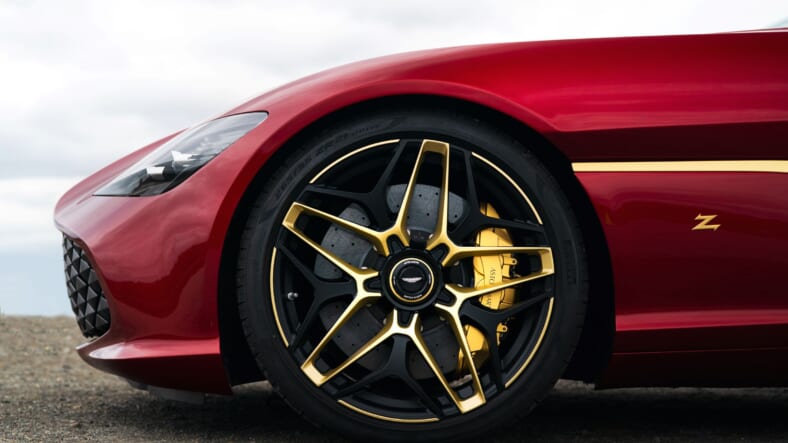 Aston Martin announced the DBZ Centenary Collection not long ago—an exclusive multi-pack consisting of a retro DB4 GT Zagato “Continuation” in the style of the 1960s-era DB4 coupe and a modern, mystery-bodied DBS that we’ve only seen renderings of…until now.

The DBS GT Zagato, recently revealed at Audrain’s Newport Concours, is based on the British marque’s flagship DBS Superleggera.

Under the hood is a snarling, 5.2-liter V12 tuned to produce 760 horsepower, up from 715 horses. Top Gear notes that performance specs weren’t revealed, but we’d guess that at least a couple tenths of a second have been shaved off of the “standard” supercar’s 3.4-second zero-to-60 mph.

Speed aside, the gorgeous ride was really created as a pinnacle of automotive design in celebration of Aston’s nearly 60-year partnership with the world-renowned Italian coachbuilder Zagato.

Inside is a totally decadent interior that calls to mind those produced by Pagani. Seats are clad in “Caithness Spicy Red” leather, Zagato “Z” seat quilting and satin.

Additionally, Aston employed what it calls the world’s first “application of configurable carbon and metal 3D-printed interior finishes.” A central “saddle” in Centenary-exclusive gold that takes nearly 100 hours to print and polish is the focal point. If that’s a little loud for your liking, carbon fiber and aluminum finishes are also available.

To get the DBS GT Zagato, buyers had to spend $7.5 million on one of 19 Centenary Collection packages and take the DB4 GT Zagato along with it. If you’re lucky enough to see one in the wild, be sure to snap a pic.