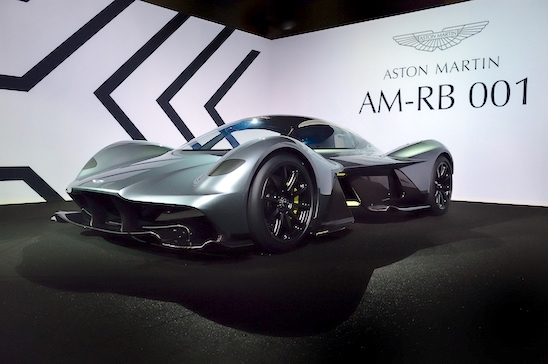 That racecar-like turning force is possible because of the $4 million car’s racecar-like lightweight carbon fiber and aluminum construction, Reichman explained. The production version will look “95 percent” like the prototype that has been shown. Reichman’s design team has been tweaking the car’s bodywork to improve engine cooling and to increase aerodynamic downforce, which is key to its ability to pull 4.5g turns.

The new Aston, which the company now says will get a proper Aston Martin-worthy name that presumably begins with a “V” in place of the AM-RB 001 nomenclature only an engineering could love, will be powered by a purpose-built new Aston Martin. That means no more annoying references to the 6.0-liter 60-degree V12 engine’s design roots as two Ford 3.0-liter V6 engines.

The hypercar will get a new 1,000-horsepower naturally aspirated V12 engine that is between 6.0 and 7.0 liters in displacement. A racing-related design detail is that the engine’s vee will spread wider than the 60 degrees that is normal for a V12. That angle provides perfect balance of the engine’s cylinders when they fire, but it creates a tall, top-heavy engine.

Formula One racing V12s and V10s used to have vee angles as wide as 120 degrees in early ’80s Ferrari V12s and 90 degrees in more recent Renault V10s, in a bid to make the engine as low as possible for a lower center of gravity, so expect Aston to do something similar.

The traditional naturally aspirated V12 powerplant will provide the rip-snorting character customers want from their near-race cars, and it will be backed by a pure racing sequential transmission from Formula One and Indy Car gearbox supplier Xtrac. A sequential transmission shifts through the gears in a linear fashion, like a motorcycle, so you must go through each gear up and down the range, with no central neutral position, as in H-pattern transmissions. This provides faster, racing-style shifting, without the added weight or complexity of a dual-clutch transmission.

The AM-RB 001 will also enjoy a hybrid-electric assist, in the form of an 80-horsepower occasional-use system that is more a push-to-pass booster than a true hybrid in the form of the McLaren P1 or the Ferrari LaFerrari. As with the selection of the sequential single-clutch transmission in place of a fashionable dual-clutch, the Aston hybrid system is simpler and lighter than competitors’ designs and keeps the focus on the car’s internal combustion symphony.

All this talk of race-readiness may create the impression of an unfriendly, uncompromising machine that requires the skills of a contortionist to enter and exit. But power-operated top-hinged gullwing doors clear space to let occupants step into the car gracefully, Reichman promised. “This is something that can be elegantly done even by a woman in a miniskirt,” he told Motoring. “Believe it or not, that was one of the considerations!”

A performance detail that Aston knows but that Reichman declined to disclose is the car’s anticipated lap time at the Nurburgring. The company has consistently maintained since the announcement of the AM-RB 001 that the car would be the fastest production car ever on a closed circuit, so it will be fun to see what lap time it ultimately achieves.  The Porsche 918 Spyder currently holds the record for production cars at 6:57.