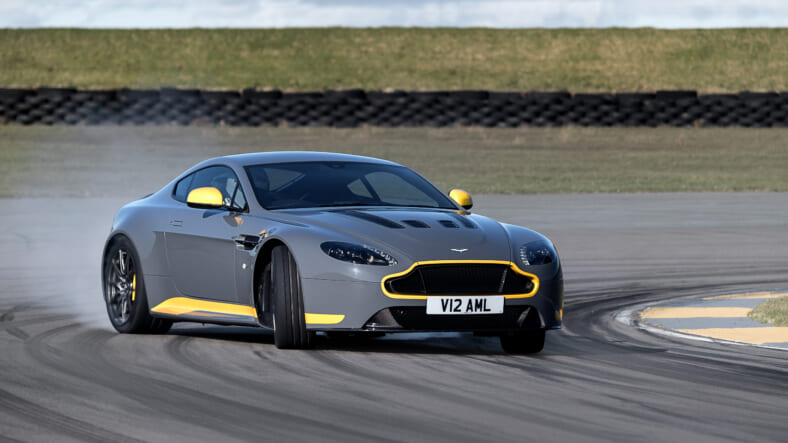 Aston Martins must be blazlingly fast if their 007-channeling drivers can outrun those enemy agents lurking at every turn, so it’s no surprise that the V12 Vantage S hits 60 mph in 3.8 seconds and boasts a top speed of 205 mph.

However, for those times when maybe the beautiful spy or her henchmen have not yet revealed themselves, it would be fun to have something to do without driving flat out. That’s the thinking behind the new seven-speed manual transmission option for the V12 Vantage S: give the driver a chance to have fun playing with this wonderful car and its exhilarating V12 exhaust sound no matter the speed.

Aston Martin’s CEO Andy Palmer has spoken lately about the company’s dedication to preserving the traditional H-pattern manual transmission in the face of an industry shift to automatic gearboxes, and this new Vantage is the latest evidence of his intent to keep enthusiasts engaged even while the likes of Ferrari and Lamborghini abandon tradition.

“Broadening the scope of the V12 Vantage S with a manual transmission option is an indication of our desire to offer the keenest drivers a more analogue and immersive machine to enjoy,” said Palmer. “I’d like to take this opportunity to reiterate that the manual gearbox remains an integral part of our product plans and will do for many years to come.”

The Vantage’s seven-speed locates first gear off the “H,” to the right so that drivers can more easily use the six main gears more easily, since first gear is only used for starting from a stop and not during vigorous driving.

In recognition that some drivers might appreciate some help operating their old-school shifter, the Vantage can be set so the car will automatically match engine revs on downshifts and to allow no-lift upshifts for quicker acceleration when the gas pedal stays flat on the floor.

First deliveries of the 2017 V12 Vanquish S manual is scheduled for the third quarter of this year, so there’s still time to get your order in.

And be sure to brush up on your clutch pedal technique.