The Audi-inspired F-Tron Quattro is powered by a freaking nuclear fusion reactor. 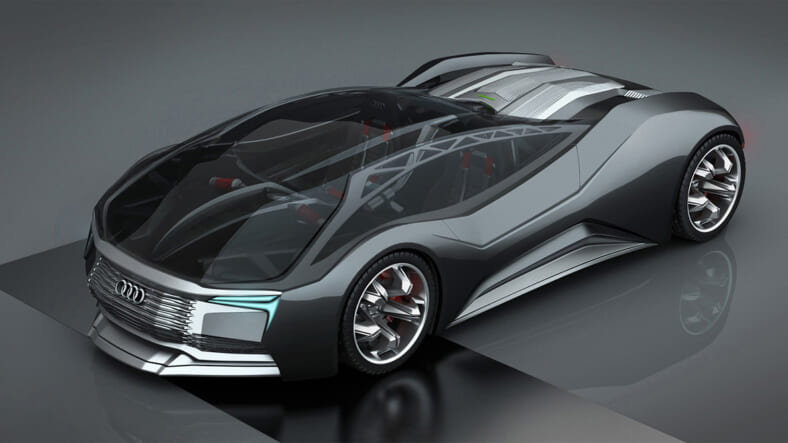 Concern about the automobile’s impact on the environment has driven the development of battery electric vehicles, but their environmental impact depends on the source of their electricity. Russian car designer Grigory Gorin wants to solve that issue by installing a hydrogen fusion reactor aboard his imaginary spaceship of a concept car.

Dubbed the Mesathrim F-Tron Quattro concept, the car is named after a star in the Aries constellation because stars are also fusion-powered, Gorin explains. The rest of the name follows Audi‘s nomenclature because he designed the concept with the notion that it would fit into that company’s product line.

The power structure would be a 3-D printed matrix of light alloy metal and polymer plastic. The description of the rest of the car sounds like a George Lucas script, with the nuclear fusion reactor, plasma injectors and high-voltage power sources located in the middle of the car, along with the reactor’s steam generator, turbines and condensers.

A fusion reactor, unlike today’s fission reactors, uses no radioactive material like plutonium or uranium and produces no radioactive waste. They do, however, produce immense radiation when active, so not only would the imaginary fusion reactor need to be invented and miniaturized, it would also need to be shielded with some non-existent material that is small and light enough to fit into a machine less massive than a Brinks truck.

Unrelated to the exotic powertrain, the Mesathrim also features an innovative system for providing traction-enhancing downforce. Like electric toy slot cars, the Mesathrim concept is drawn to the road by magnetic force, using a flat tank on the car’s underside that is filled with a magnetic fluid that is attracted to the special road surface. Using a liquid magnetic material rather than solid lets the magnetic force be moved around on the fly to enhance grip where it is most needed at the time.

While the Mesathrim is meant to be an enthusiasts’ plaything, like any future car, it also provides a self-driving autonomous mode when the car takes over from the driver.

If atomic power sounds like a mid-century space-age notion, you’re right, we’ve been here before. Ford showed the Nucleon concept car in 1958. As with Gorin’s Mesathrim, the Nucleon was purely imaginary, but designer Jim Powers was able to build a 3/8th scale fiberglass model. Plus the Ford has an awesome mid-century name that sounds like one of Godzilla‘s foes.