Driving the Audi R8 Supercar Is a 205 MPH Treat

Turns out that Iron Man’s favorite ride is a flat-out thrill to drive. 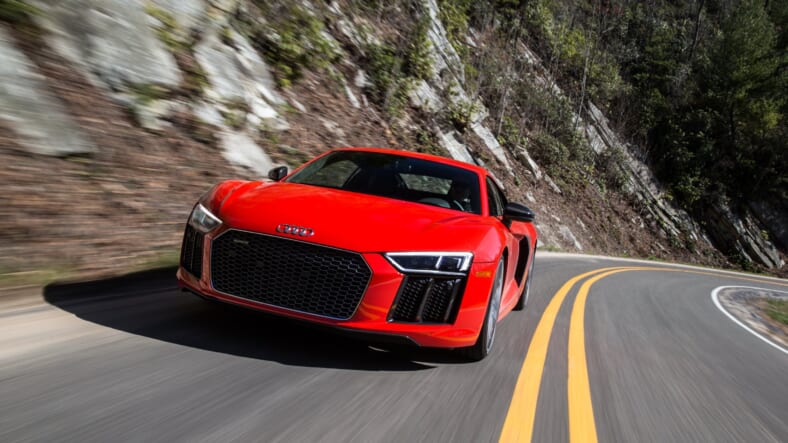 The Audi R8 has become as identified with Iron Man nearly as much as the Batmobile is associated with the Caped Crusader, so when the German carmaker redesigned its flagship sports car for 2017, that was one reason the new car needed to hew closely to the outgoing model’s style. That, and because the original car looked great.

To gauge the success of the R8’s revisions, we spent a week behind the $198,950 supercar’s leather-wrapped steering wheel. A quick piece of info to underscore the R8’s incredible speed, since it is hard to tap its 205 mph top speed on the street: It laps the Daytona Motor Speedway’s road course just 10 seconds slower than the race version did during this year’s 24 Hours of Daytona sports car race.

As before, the R8 shares drivetrain and chassis underpinning fundamentals with Lamborghini’s V10 sports car, in this case, the Huracan.

The R8 rides on a slightly longer wheelbase and the V10 plus model’s 610 horsepower (which is 70 hp stronger than the base R8 V10) and the same as the Lambo. Cool detail: the engine sits slightly off-center to the car’s centerline. Audi shifts the rear cross-brace to match the engine, while Lamborghini’s brace is centered on the car, making the engine look off-center.

That V10 roars its awakening every morning through open mufflers, despite the steering wheel-mounted button that controls the car’s muffler bypass valves at all other times. Inexplicably, a stealthy start isn’t an option, even on misty Virginia summer mornings. My neighbors weren’t impressed.

As part of the redesign, the R8’s structure is a massive 40 percent stiffer than before, and new shock absorbers and front suspension design permit even better control and steering accuracy than before. Critically, a change in the design of the all-wheel-drive system now lets the R8’s computer shift 100 percent of power to the front or rear wheels as needed. This eliminates the understeer that has plagued the R8 (and Lamborghinis) previously.

The transmission is a 7-speed dual-clutch design, which means that the car runs in two gears at the same time and changes instantly between them by simultaneously opening and closing the clutches to the two gears. Lightning is slow in comparison the the R8’s gear changes.

Out on the open road, far from riled neighbors, those shifts sound absolutely glorious when driving with the R8’s Drive Select system switched to Dynamic mode and the muffler bypass valves open. Combined with our test car’s Dynamite Red finish, the situation is an invitation to a ticket, but we were fortunate.

The R8’s Bang & Olufsen 13-speaker, 550-watt audio system is worth a shout out for its excellent sound, thanks in part to the cool high-def audio tracks Audi pre-loaded on the test car.

And the Virtual Cockpit, which puts the navigation display directly in front of the driver along with the instruments shows the way forward, eliminating the ugly center video screen in most cars. Or you can put it into track mode to show tire temperatures and pressures along with cornering and braking forces.

The overall result is a technological tour-de-force completely worthy of Tony Stark and Iron Man. And his estate is sufficiently remote to avoid annoying the neighbors every morning.