Why Austin May Be America’s Wildest Town For Motorcycle Maniacs 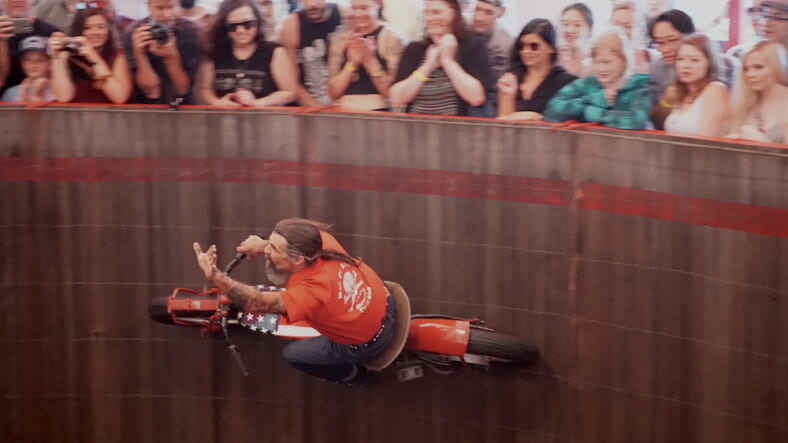 A man named Mark, who is wearing a patch-covered denim vest and pounding a can of Evel Ale, tells me he doesn’t like how popular Austin is becoming. The buzzy Texas boomtown of about a million people is, after all, one of America’s fastest-growing cities. But Mark complains that property taxes are insane, construction can’t keep up with demand, and traffic is worse than ever. Our conversation is cut short by the glorious sound of a big V-Twin engine firing up as a guy named Charlie Ransom, who has long, gray hair and wrinkly tattooed skin, announces that the “Wall of Death” is about to start.

That particular attraction—which is basically a huge, wooden bucket that daredevils on 90-year-old motorcycles ride around inside of, parallel to the ground—is taking place at a carnival sideshow set up outside the Handbuilt Motorcycle Show. It’s one of three major motorcycle events that converged on Austin over the same weekend in April. MotoGP is another, returning to Austin for its fourth year in a row to race at the Circuit of the Americas (COTA). And for the first time, AMA Pro Flat Track and motorcycle builder Roland Sand’s Super Hooligan gang are racing at a dirt oval just down the road from COTA. This weekend formed organically, has grown exponentially, and now attracts huge crowds that include bike-loving celebrities like Jay Leno, Jason Lee, and Keanu Reeves.

The Handbuilt Motorcycle Show, organized by local bike builders Revival, displays intricately designed bikes from some of the country’s most eclectic builders, like Alex Earle and Dustin Kott, as well as motorcycle-inspired art, but it seems most people are drawn to the Wall of Death, which incidentally is a variation on the “Globe of Death” that Ryan Gosling’s stuntman character rides in the 2012 movie The Place Beyond the Pines. The faces of the people seeing old Ransom on his even older Indian Scout ride around in circles on the near-vertical wall without touching his handlebars while sitting sidesaddle on the bike? Priceless.

I make my way to the AMA Pro Flat Track race on the outskirts of town. This is the first time flat track has come to Austin, part of a revamping process that the storied-but-often-snubbed sport is currently undergoing in hopes of attracting a wider audience. The pits are far more crowded than they were at last fall’s season finale, and the bleachers are pretty packed when Roland Sand’s completely batshit Super Hooligan series takes off around the dirt oval on their big engine bikes that would typically have no place here.

It’s a raucous, hilarious race that comes to a halt when a rider for Suicide Machine Company has a nasty spill coming out of the last corner. Flat track isn’t really supposed to be safe as the scars worn by Brad Baker, the top seed for tonight’s main event, will tell you. The 22-year-old throws a leg over his Harley-Davidson, staged just in front of reigning national champion, 30-year-old Jared Mees. The two get after it on the track, sliding their bikes side-by-side on the dirt, but it’s Mees who wins after Baker’s bike fails due to a bad camshaft bearing.

The next morning is the MotoGP race. There’s a huge crowd waiting outside of the Yamaha garage hoping to get a glimpse of Valentino “The Doctor” Rossi, the oldest rider out here and one of the biggest sports stars in his home country of Italy. But all eyes are on Marc Marquez, the 23-year-old Spaniard who is sitting on the pole and looking for his fourth consecutive win at COTA.

I wade through the crowded paddock and head into the equally packed Alpinestars suite to watch the race. Not long after it starts, Rossi—the favorite for an upset—goes down before Honda-Repsol rider Dani Pedrosa falls off his bike and accidentally takes out Ducati’s Andrea Dovizioso, who’d been in second place. Marquez takes the checkered flag, coming across the finish line an astonishing six seconds before the rider that’s been chasing him, three-time world champion Jorge Lorenzo.

It’s the cherry on top of what is surely America’s most entertaining weekend on two wheels. While Austin’s bikefest isn’t as big as biker mainstays like Daytona or Sturgis, it soon should be, and Austin could become the center of the bike world. There’s simply no other weekend that boasts three different events working together to entice enthusiasts from every sect of motorcycling to come together.

Seeing how the rising popularity of Austin’s premier bike weekend mirrors the city’s own explosive growth, let’s hope it gets bigger and better—in a way that even Mark can get behind.