There’s a Honda under there somewhere. 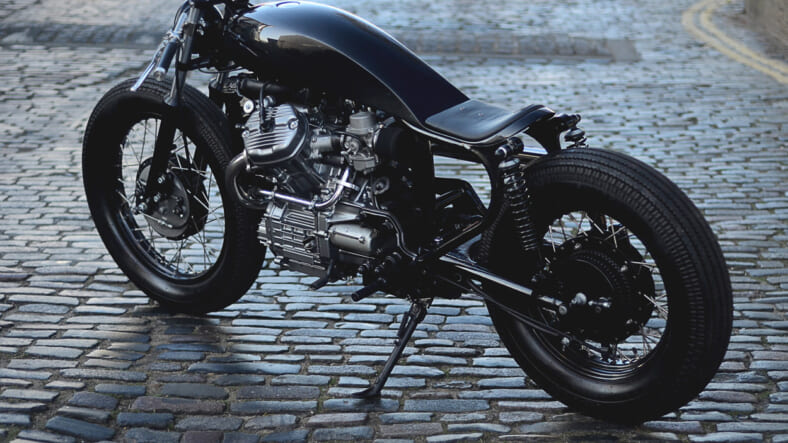 UK-based motorcycle customizers Auto Fabrica have done the seemingly impossible with a lowly Honda CX500 and turned it into a classically cool café racer. Of course they started by stripping the bike down to its frame, because the basic underpinnings are of sound design.

“The surprise lay in the frame being such an organic form,” Auto Fabrica’s Bujar Muharremi tells Bike EXIF, “with a really awesome side profile. We played around with the idea of reworking it, but it became a bit of a guilty pleasure. We decided to challenge ourselves to make it look purposeful and aesthetically pleasing.”

They came up with a hand-beaten, aluminum tank anchoring sinuous bodywork, both blacked out. And then they added the piece de resistance, a seat covered in dark, perforated leather, with a logo plaque and eyelets revealing discreet tan leather highlights. Finally custom forks, springs, shocks and wheels, plus upgraded tires.

The engine was also rebuilt with gas flowed heads for extra performance, and as a final touch an elegant exhaust system was hand crafted from 316 stainless steel. “It was a part of the bike which we felt like we could go wild on,” Bujar says, “so we opted for a twist high rise design. The key was to avoid any straight lines, which became a great challenge—but it worked pretty well.”