Check out this wild sneak peek at the future of commuter travel. 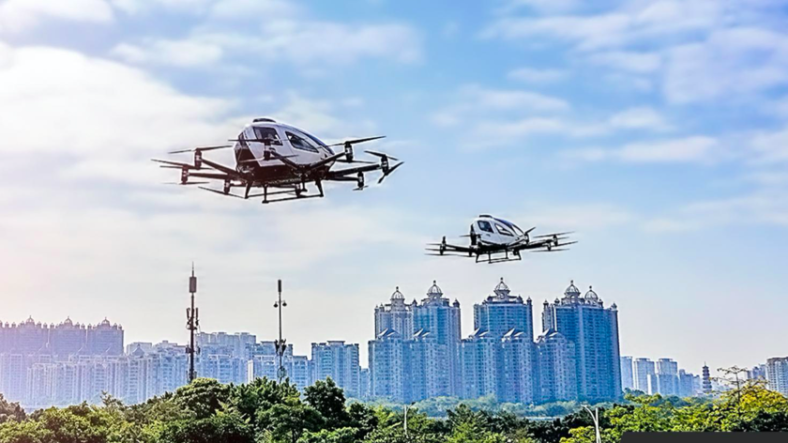 EHang is a Chinese company that has made something of a splash running large scale aerial light displays using coordinated drones. They’re stepping up from that in a big way, and in the process, they could be at the forefront of an electric air taxi revolution.

Robb Report notes that the “Chinese manufacturer is moving ahead with electric vertical takeoff and landing aircraft that, unlike many competitors, are autonomous—or what they call autonomous aerial vehicles or AAVs.”

Autonomous doesn’t mean unmanned, though, and as the video above demonstrates, EHang was testing manned flight as far back as 2018.

Their fleet of quad- and octocopters are intended for passenger use but won’t have pilots. Here’s more from Robb Report:

The idea may not be as frightening as it initially sounds. Last year, Prince Pieter Christiaan of the Netherlands flew on a 216 AAV in a demonstration flight while the rest of the Dutch royal family watched on the ground. EHang also recently demonstrated its first autonomous flying taxi at a North Carolina airport. Its founder and CEO, Hu Huazhi, can be seen waving from one of its 216 models as it buzzes across the sky.EHang, now listed on the Nasdaq after filing a $100 million IPO last November, says it sold one of the 216s in 2018 to a private owner, and another 60 have been sold in the US, Asia and Europe since then. “This delivery marks a major step forward in EHang’s efforts to offer a full-stack solution for the emerging urban air mobility market on a global scale,” Hu told eVTOL.com after the first aircraft was sold.

EHang’s vision seems based on the work it already does with light shows. They have conceived of what’s being called “urban air mobility networks.”

Those networks would consist of “thousands” of flying taxis running from ground control. This isn’t a tech fantasy, either, as Robb notes that EHang has secured permits fro its 216 AAV in Norway and Spain and China’s Civil Aviation Administration granted them an “Airworthiness” certificate.

The company says they are working with the FAA in the United States to achieve similar certification.

EHang has already proven its concepts and set a world record in doing so. Robb Report writes that in order to “prove the autonomous technology, [EHang’s] Ghost drone formation set a Guinness World Record in 2018 for the largest drone display. It flew 1,374 drones in formation for more than 13 minutes, forming different images that stretched nearly a mile.”

EHang drones do this via GPS technology so precise two drones can fly a mere two inches apart. This is an example of the kind of innovation that sets the company apart from competitors around the world.

As so many endure self-isolation due to the coronavirus pandemic, it’s easy to start feeling like we’ve gone back to living in caves, albeit with snacks, booze, and streaming TV. At least there are still companies out there making a sci-fi future that seemed like a dream just a decade ago into a reality.

EHang is working out regulatory issues around the world, but what founder Hu Huazhi calls “a new era of urban air mobility” will be here before we know it.