Watch it smoke a McLaren. 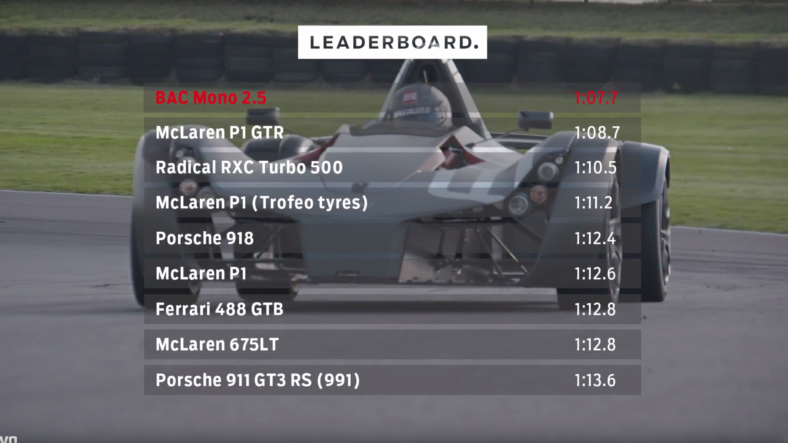 English compact supercar maker BAC’s Mono has triumphed over the race-prepped McLaren P1 GTR in a lap of the Anglesey Coastal Circuit race track, where it topped the racing slick-equipped McLaren by a full second, even while driving on street tires.

The shootout was conducted by evo magazine‘s Richard Meaden, and the 305-horsepower, 1276-lb. Mono also easily ousted stalwarts such as the Porsche 918, Ferrari 488GTB, McLaren 675LT and Porsche 911 GT3 RS.

“When the record lap was set, it looked incredibly quick – the video reinforces just how fast it was and how great a feat this is,” said BAC co-founder and director of product development Neill Briggs. “To be at the top of evo’s leaderboard is an honor and we are looking forward to attacking and conquering other production car records around the world in 2017.”

They may get the chance to re-set this particular record, as driver Meaden opined that he believes the Mono is capable of getting below a 1:07.00 lap at the circuit.

For the rest of us who don’t spend our time shattering track records but enjoy purposeful machines like the Mono, for 2017 the car enjoys a few comfort upgrades.

The optional wider cockpit introduced for 2016 is standard for 2017, as is a weight-saving electric parking brake. Illuminated switchgear is relocated to the steering wheel, controlling, among other things, a new five-stage stability control system, launch control and automatic upshift capability.

If you can live without a roof, or a passenger, and don’t mind donning a helmet for a drive to the CVS, here’s your speed champion: the BAC Mono.