The BAC Mono Is A Barely Legal Speed Demon

This British supercar brings the thrill of pro racing to the streets. 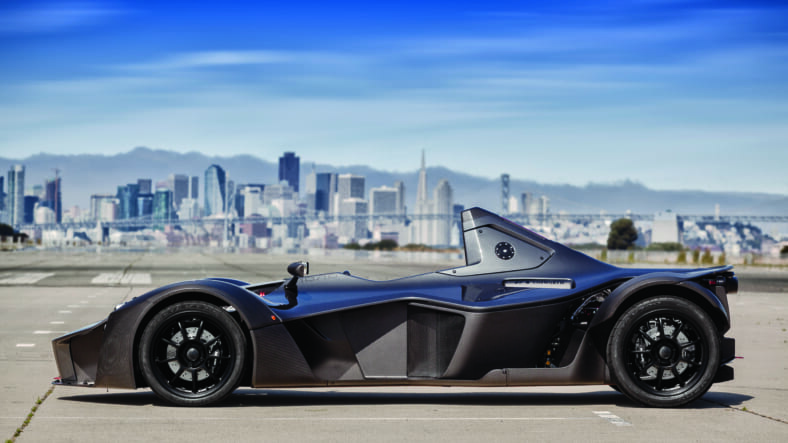 Welcome to the daydream. Step into the central cockpit, slide into the seat, buckle into the racing harness, and hit the button to start the most powerful automotive experience available to nonprofessionals: the single-seat, $250,000 Mono, from Britain’s Briggs Automotive Company.

People buy exotic cars to fuel their racecar fantasies. Trouble is, street- legal sports cars, even ones built by the production arms of Formula 1 racing teams like Ferrari and McLaren, are nothing like racecars. They are just louder, less comfortable street cars.

To make it street legal, BAC builds the aptly named Mono as a one-seat rocket that is little more than a racecar with fenders and lights. Compared to fire-breathing, 1,000-horsepower monsters like the McLaren P1, the Mono’s 305 horsepower might seem lacking. But because it weighs only 1,279 pounds, those 305 horses from its 2.5-liter four-cylinder engine can launch the nimble little beast to 60 mph in 2.8 seconds and to a top speed of 170 mph.

“Driving the BAC Mono is for me, as a jaded automotive experience junkie, a lightning bolt of clarity,” says CJ Wilson, Los Angeles Angels pitcher and owner of CJ Wilson Racing, who drives a McLaren P1 and has ordered his own Mono. “Mono makes me feel like a kid in terms of joy, and like a professional athlete training for the sport of racing.”

The Mono’s zoomy carbon-fiber body panels borrow their styling from a less earthly realm, according to BAC cofounder Ian Briggs. “We looked at science fiction movies, we looked at robots, we looked at spaceships and aircraft, and they were the things that influenced how it looks,” he says.

Stripped of its sci-fi, aerodynamically optimized bodywork, the Mono’s bare steel-tube-frame chassis is a familiar sight to anyone acquainted with the kinds of racecars that serve as stepping stones to IndyCar and Formula 1. One of the benefits of this design, for example, is that in response to customer requests, BAC has been able to spread the steel tubes that form the cockpit about two inches farther apart, allowing for more elbow room.

As with any Formula-type racing car, the driver sits low to the ground, seat skimming just an inch above the pavement. The engine mount is directly behind the driver, serving as part of the frame, and bolted to a Hewland Engineering FTR sequential six-speed racing gearbox borrowed directly from a Formula 3 racecar.

The suspension mounts directly to the Hewland; no cushy bushings or subframes to reduce vibration here, just crucial parts that serve the purpose of advancing performance.

Inside, the cockpit is bare. All the controls and instruments are installed directly in the steering wheel, which is removable to ease ingress and egress. As with the rest of the engineering, every detail is exquisitely executed, completing the rarefied driver experience of an F1 pilota.