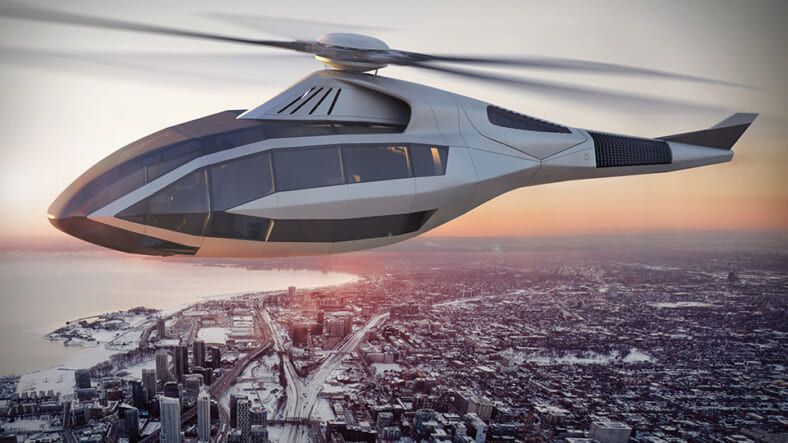 What can the helicopter of the future look like? That was the question Bell Helicopter asked its designers. Their answer is the Bell FCX-001, an Airwolf-worthy chopper that pioneers new frontiers of design and technology.

To start, look at what is not there: the tail rotor. Instead, torque is managed by ducted air jetting out the side of the tail boom. The elimination of the tail rotor not only contributes to the FCX-001’s futuristic looks, it also reduces drag and cuts down on some of the whirlybird‘s racket.

It is harder to see, but the main rotor may be the FCX-001’s biggest advance. It changes shape in response to pilot input morphing into the optimal shape for the current flight mode. As with the elimination of the tail rotor, this should also reduce noise.

Bell recognized that it was important for the FCX-001 to instantly convey the presence of its advanced technology with futuristic appearance to match. “We went out to see the latest Lamborghinis, the Ferraris, all that kind of stuff; we took various elements of those and then pull all of those into one cohesive design,” said Doug Fidler, concept design leader.