The Bentley Bentayga Bengala Is Half Luxury SUV, Half Terrifying Tank

This brutish British off-roader is ready for battle. 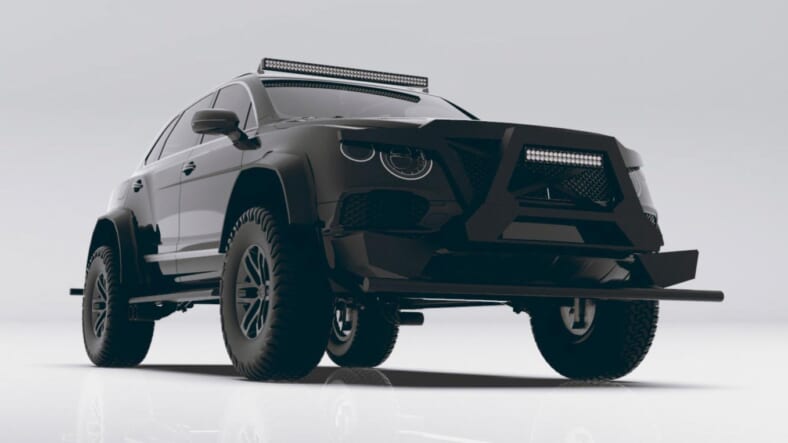 The ultra-posh Bentley Bentayga is getting a gritty makeover fit for a military tank.

Bengala Automotive Design, a Spanish design house previously showed their penchant for aggro body work on the Ferrari F12 “Caballiera,” set out to combine luxury with “brutal appearance and outstanding performance” in their murdered-out take on the beastly British SUV.

The Bentley Bentayga Bengala’s loudest features are the badass push bumper and LED strip that partially cover the off-roader’s giant grille. As Motor 1 notes, these mods in particular call to mind the Rezvani Tank.

Aside from a tuned-up suspension, the custom job is almost entirely aesthetic. That’s just fine by us, as the 540 horsepower produced by the Bentayga’s stock twin-turbocharged, 4.0-liter V8 already gets it to 60 mph in 4.4 seconds.

According to Bengala, an unnamed Spanish rally champion helped develop the custom Bentayga.

Only 15 of these ultra-exclusive vehicles are being made, so anyone who orders one can rest assured that they’re getting a truly unique ride worthy the world’s roughest environments.

Head to Bengala’s website to inquire about price, if you dare.