Cruising The California Desert In The World’s Most Expensive SUV

The glorious Bentley Bentayga already has a year-long waiting list. 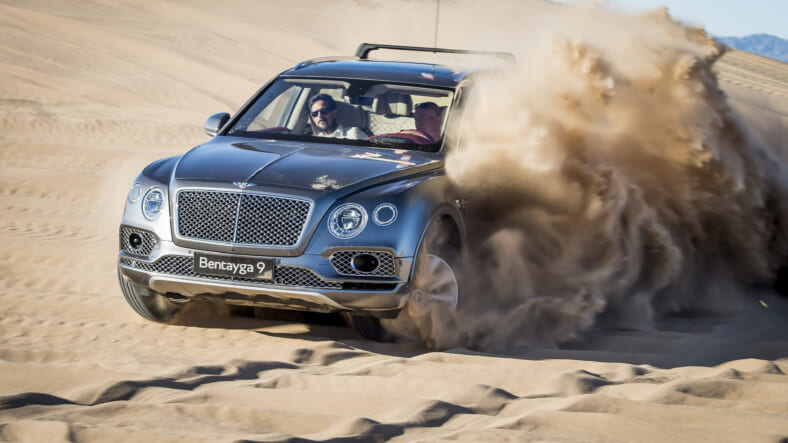 Bentley is being very clever about marketing the new Bentayga as the world’s most powerful, exclusive and expensive SUV. The truth is, at $229,000 it’s just $11,000 more than the next true contender for the title, the Mercedes-Benz G65 AMG (which actually has more horsepower, though the Bentley is faster). So for less than the cost of a fancy Apple Watch, would-be G-Wagen buyers can bag some serious bragging rights as well as a much more luxurious ride.

So just how effective is this campaign? Well, there’s already a year-long waiting list to buy one. Which is why we were especially chuffed to have a Bentayga at our disposal recently for a trek into the desert, on the racetrack and off-road in and around Palm Springs, California – where Bentleys are a common sight but the Bentayga still draws envious stares, no doubt from those on that getting longer-by-the-minute list.

Given the sheer size of the Bentayga, its numbers aside from the price tag are truly shocking: 0-60 in 4.0 seconds with a top speed of 187 mph, thanks to its 600 hp, 6.0-liter turbocharged W12 engine. Lots of peevish noises are being made about the vehicle’s styling, but it’s a Bentley through-and-through with the British marque’s distinctive front end and unrivaled finish, including gorgeous instruments and gauges and acres of heirloom-quality wood and quilted leather, all of it evoking the hand-built ethos that is Bentley’s hallmark.

Which made taking it off-road especially decadent, and all the more impressive when we were coached around obstacles and impediments much more daunting than on some “real” SUV tests we’ve done. All conquered with the 007-esque precision and effortless British-accented elegance that we’ve come to expect from the brand with the flying ‘B’. It’s rather redundant to point out that most Bentayga buyers will never negotiate anything more threatening than a few inches of snow; they don’t need to, but the confidence of knowing they can is money in the bank.

To demonstrate the Bentayga’s capabilities even further, we traveled by helicopter to the remote Imperial Sand Dunes for another test run;  perhaps a nod to the oil sheikhs who’ll be buying Bentaygas by the boatload no matter what the price of gas is. However we highly recommend that all Bentayga buyers step out of their comfort zone long enough to give this a whirl. There’s something other-worldly and curiously weightless about cruising at high speed through sand, especially when the only other vehicles doing it are Mad Max-style dune buggies driven by maniacal hillbillies.

On the Chukwalla Racetrack we put the Bentayga through its paces one last time, to see just how ravenous and engaging its 600 horses can be when given free rein. Not for Bentley to leave the “world’s fastest” claim untested. However we felt that such excessive speed was a little ungentlemanly when not being pursued by Bond villains and such. For heaven’s sake, Missy might spill her martini in the back seat, or should we say “rear compartment.”

Which brings us to the laundry list of extravagant options which can quickly send the Bentayga’s sticker skyward. For the price of the $165,000 Breitling tourbillon dashboard clock (only three will be made per year) you could get a couple of extra Range Rovers, but that’s more or less the point – the sort of people who would drop the coin on the clock already have a couple of extra Range Rovers, which they let the staff use on runs to and from doggy daycare that costs as much as a college education. Elitist? Yes, and why the hell not? The world has way too many Kias as it is.