Trust us, no one will care how shitty your stuffing is. 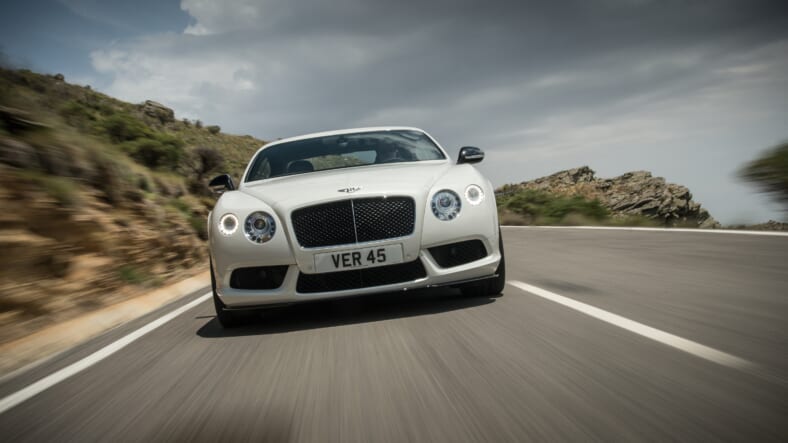 While ostensibly a time to gather with loved ones, give thanks, and eat your weight in turkey, Thanksgiving usually plays out pretty differently. Clogged-up interstates, violent political disagreements, and boozed-up uncles can make what should be a fun-filled family holiday something you start fearing come Labor Day. So how best to make the annual schlep back home bearable—nay—dare we say spectacular? Roll up to the house in a brand-new Bentley Continental GT V8 S.

See, the best thing about a Bentley is, they have the perfect car for whatever kind of motoring experience you’re looking for. For example, if you’re the lucky owner of a Mulsanne Extended Wheelbase, you can stretch out all the way in the backseat and take a full-on nap while your driver gets you where you’re going. But you don’t want him tagging along for dinner, do you?

If you’re looking to go on a desert trek in the world’s most luxurious SUV, there’s the glorious new Bentayga. Unless your family is permanently camped out at Burning Man, however, it’s simply not the right vehicle.

But if you’re going to be driving a long distance for Thanksgiving, and you truly relish the experience of transporting yourself from point A to point B, you need to be behind the wheel of the Continental GT V8 S, the best driver’s car in the iconic British marque’s fleet. After spending a week driving through California in one, we can explain exactly why.

1. The drive itself will be spectacular.

Let’s start with the numbers. The Continental’s twin-turbocharged 4-liter V8 produces 520 horsepower and over 500 lb-ft of torque. While slightly less powerful than the available 12 cylinder, the 8 keeps things lighter and simpler. It moves from 0 to 60 in 4.3 seconds (which we were able to experience in our test car) and hits a top speed of 192 mph (which we were not). The transmission is a close-ratio ZF 8-speed automatic which always seems to place you in the correct gear—especially when you’re in quick-shifting Sport mode.

What numbers can’t describe, however, is precisely how it feels to power down the highway in the Continental. Imagine driving a luxurious tank that is somehow still incredibly fast and nimble, and you’ll start to get the idea. The air suspension provides the ideal balance between road feel and, well, floating on air. No matter how far your ride home is, you’ll be happy to keep going just a few more exits.

2. There’s plenty of room for food.

While anyone over five feet probably wouldn’t want to take a long ride in the back seat, there’s certainly enough room for some side dishes and dessert. (Just make sure to keep any sauces far, far away from the ultra-plush carpet.) The trunk—or boot, if you want to be a dick about it—has 12.6 cubic feet of cargo space, which is more than enough for a giant Butterball in addition to your luggage. (We’re partial to the Briggs & Riley’s Sympatico CX International Carry-On Expandable Spinner, a sleek hard-sided piece that expands for 22% more space then compresses right back to original size when you’re back home.)

“Well look who decided to bless us with his presence!” we can already hear your loopy aunt shouting from behind the screen door. While it doesn’t scream out to be noticed like similarly priced Lamborghinis or McLarens (we’re talking about the $250K neighborhood), the aggressive-yet-stately Continental absolutely stands out when seen among the common cars of hoi polloi—no one is mistaking it for Cousin Mark’s Prius. Its muscular rear haunches are our favorite design feature; the car looks just as powerful as it actually is. And parked in front of your childhood home? That definitely unlocks some kind of awesomeness achievement.

4. You’ll have a new conversation topic when things start getting ugly.

Considering how contentious the recent election was—and continues to be—there’s little doubt that things are gonna get uncomfortable at some point between the apps, main course, and dessert. Well, that’s the perfect time to change the subject completely and ask, “Hey, who wants to take a quick ride around the block in the ol’ Bentley?” Suddenly, Republicans, Democrats and everyone in-between will shut the hell up for once while waiting their turn.

5. There’s no better place to escape to.

No matter how many rides you give, and how many smiley, drunk, tryptophan-ed faces are sitting around the table, at some point you’re going to need to get the hell out of there. And especially if your childhood bedroom has been converted into mom’s Jazzercise studio, the Continental outside is the perfect refuge.

When the doors are shut, and you’re ensconced in the impossibly soft leather, stately wood veneers, and polished metals, negative thoughts have a way of disappearing. In a Bentley, every single button, knob and switch has a weight and heft to it that makes the simple act of utilizing it totally satisfying. And since the GT V8 S comes standard with a state-of-the-art infotainment system, you can do like we did—pump some old-school hip-hop on SiriusXM, close your eyes, and let the 11 Naim for Bentley speakers take you away to another place.