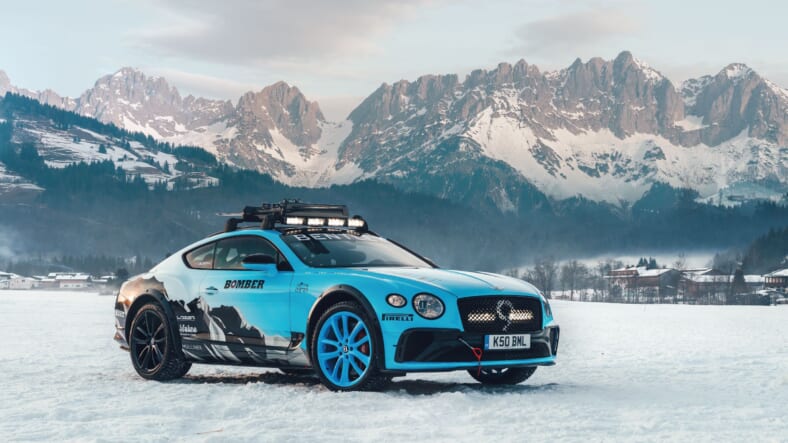 Bentley will enter the recently revived GP Ice Race in Zell am See, Austria for the first time with a very cool version of the 2020 Continental GT. The weekend-long competition pits drivers against 600 meters of frozen, purpose-built track in standard racing and skijoring, an event in which a skier is towed by a car over frigid terrain.

Bentley made as few changes as possible to the production model. The body was raised slightly for more ground clearance, the wheel arches were extended outward to accommodate studded Pirelli Scorpion Ice Zero2 tires, bars of Lazer high-performance lights were added behind the grille and on the roof, and the engine’s fumes are released through a bespoke exhaust system by Slovenia’s Akrapovic, the same company that makes regular Continental GT pipes.

Additionally, the cockpit was outfitted with the requisite racing seats, harnesses and roll cage, and there’s a pair of Bomber for Bentley Centenary Edition skis mounted up top that will presumably be used by skier Sven Rauber in the skjoring event.

That’s pretty much it regarding alterations, although the coupe is also dressed in a mountainous blue livery as a tribute to the Continental GT that set the time for the fastest production vehicle at Pikes Peak in 2019. Underneath the hood is the same twin-turbocharged 6.0-liter W12 that’s good for a 3.6-second zero-to-60 mph time and 207-mph top speed.

Junior World Rally Championship driver and FIA European Rally Championship Ladies Trophy winner Catie Munnings will helm the Ice Race Continental GT. We’ll see if it sets records in the snow like it did on the famous Colorado hill climb when the GP Ice Race unfolds on the weekend of February 1.