You thought they were buying Hyundais? 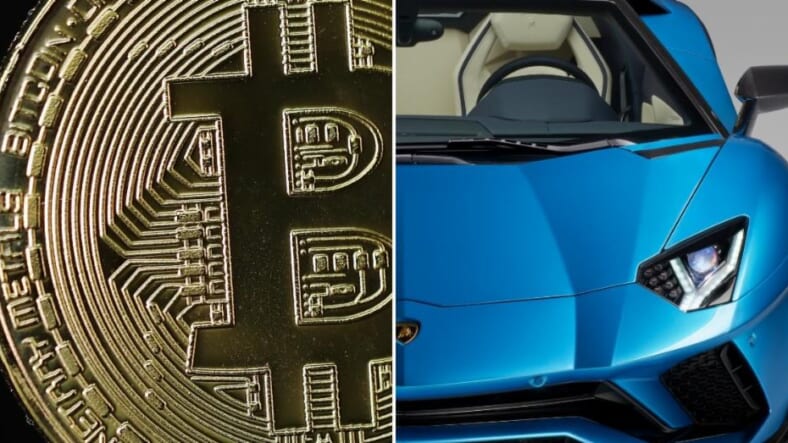 While Bitcoin recently rebounded slightly after its worst first quarter in history—over $119 billion was wiped off its value—chances are, at this point, you ain’t getting rich off the most well-known of cryptocurrencies if you haven’t already.

But for those who have, there’s just one thing to do: buy a Lamborghini.

Bitcoin bros the world over are purchasing the iconic Italian supercar as the symbol of their newfound wealth, which is why Lamborghini Newport Beach posted an announcement on Instagram that it accepts Bitcoin as payment for its cars.

Some jokers even launched a “When Lambo?” parody website in response to the rise of that question as a benchmark of cryptocurrency success.

Lamborghini Newport Beach had good reason for its openness to the electronic make-believe money, according to a report on CNBC.com.

Pietro Frigerio, the dealer principal and general manager at Lamborghini Newport Beach in Costa Mesa, California, saw sales of the car spike as the price of bitcoin skyrocketed.

The dealership, which sells new and used Lamborghinis, along with other used luxury cars like Ferraris, began accepting payments through bitcoin in 2013, a year in which bitcoin saw price fluctuations from below $100 to over $1,000. In December, when bitcoin hit a high of $19,000, Frigerio saw a jump in cryptocurrency-involved sales with Lamborghinis. “We went from one, maybe two transactions a month from 2013 until 2016, and in [December 2017] alone we had over 10 transactions,” Frigerio tells CNBC.

Perhaps uncoincidentally, Lamborghini broke its annual sales record, topping a billion Euros in sales for the first time in 2017.

“Lamborghini realized another record year and we are once more outperforming our financial objectives,” remarked Stefano Domenicali, chairman and chief executive officer of Automobili Lamborghini. “This was achieved while mastering an unprecedented double challenge: preparing for new models in our super sports car range, while simultaneously doubling production capacities at our headquarters in Sant’Agata Bolognese, heralding a quantum leap in our product portfolio.”

Maybe it is too late for the rest of us to make money on Bitcoin, but the idea of getting a Lamborghini out of it certainly makes the idea tempting.