There’s also a beautiful bike to go with it. 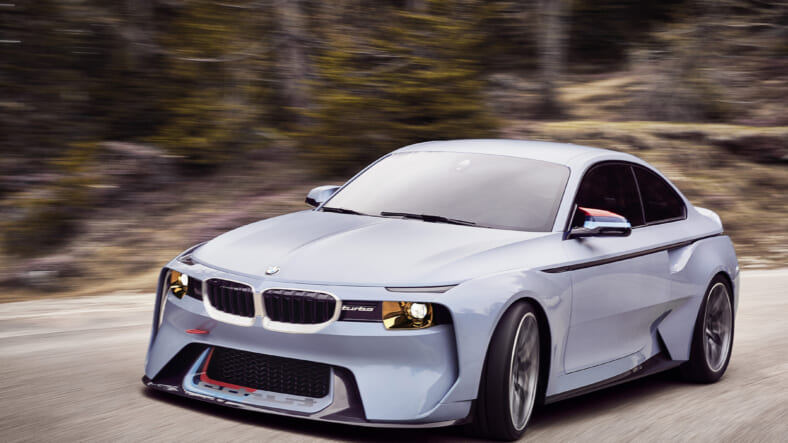 BMW has made a recent tradition of dropping classically inspired bombshells at the Concorso d’Eleganza Villa d’Este, and this year the company hedged its bet by building a compact sedan hot rod in the tradition of the company’s beloved 2002 and a low-slung cruiser motorcycle that would draw crowds anywhere it might go.

The custom machines pay tribute to the debut 80 years ago of the classic 1936 BMW R5 motorcycle and 50 years ago of the beloved 1966 02 Series, the car that established the entire European sport sedan category starting out as the 1602, and concluding as the larger-displacement 2002.

The R5 Hommage motorcycle is a throughly retro-styled machine benefitting from modern upgrades like disc brakes. “At its debut, the R 5 was not only a masterpiece of engineering, the clarity of its lines and the elegance of its proportions also made it stand out clearly from the masses,” said Edgar Heinrich, Head of Design BMW Motorrad.

“Our aim was to transport its clarity and elegant aesthetic appeal to the modern era, creating a respectful combination of old-school and high-tech with a dash of high performance.”

The R5 was built using an original R5 500 cc boxer twin-cylinder engine dressed in custom valve covers and breastplate which where machined from solid aluminum and polished to a chrome-like sheen. A supercharger boosts the engine’s output “significantly” beyond the original’s 26 horsepower, but its exact specifications are unlisted.

Three decades after the debut of the R5, BMW revolutionized the compact sedan market with the 02 series, which gave enthusiast drivers an unprecedented combination of handling and practicality.

“This compact coupe is one of the vehicles which made the brand what it is today,” explains Adrian van Hooydonk, Senior Vice President BMW Group Design. “At the same time, the 2002 turbo was at the technological vanguard of engine development at BMW. The BMW 2002 Hommage is our way of raising a glass to all these achievements.”

Based on the new BMW M2, the 2002 Hommage echoes the chrome strip running along the sides of the original 2002 with a black carbon fiber strip on its sides.

In reference to the 2002 Turbo, Europe’s first production turbocharged model, the Hommage wears aggressively flared wheel arches for a wider stance.  The car’s 20-inch wheels are machined from solid blocks of aluminum in the style of ’70s racing wheels, and the brake calipers are painted gold to resemble those of the period.

We hope that BMW’s success with these tribute vehicles will embolden other manufacturers to exploit classic car venues like the Pebble Beach Concours d’Elegance to exhibit modern interpretations of their own classic models.