The BMW M2 Coupe Is a Track-Ready Treat

Why driving the thrilling new M2 is pure pleasure. 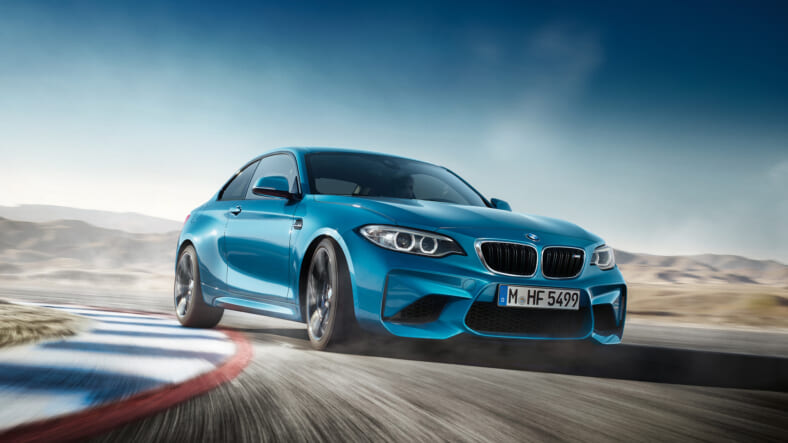 The BMW M2 is a 3,450-lb antidote to this obesity crisis. Active Cruise Control? Autonomous driving?! The M2 laughs at the absurdity.

We become acutely aware of this raw machinery at the legendary Mazda Raceway Laguna Seca in northern California. As we arrive to the paddock, a guy wearing a BMW polo tosses us keys to the new M2.

We slip inside in the electric blue-stitched interior and press the Start button with a sense of childish glee. Within the first four laps of the 11-turn track, the burst of quickness and dizzying tossability of the diminutive sports coupé becomes thrillingly apparent.

Borrowing the 3.0-liter turbocharged inline-six-cylinder from its larger M3/M4 cousins, BMW engineers retuned the engine and shoehorned it under the bulging hood of the M2. That means 365-horsepower in a lighter, tighter package.

And if you’re worried about turbo lag from the twin-scroll unit, don’t bother. The M2’s full 369 lb-ft of torque is accessible at only 1,400 rpms, which is enough bottom-end to punch the diminutive racer from standstill to 60-mph in just over four seconds.

This booster-rocket acceleration is only one of the reasons the M2 conquered the infamous Nürburgring in under eight minutes (7:58 to be exact). Pure quickness won’t do it alone; this lap time is a testament to the superlative handling of the M2.

Borrowing its “Active M” multi-plate limited slip differential and most of the front suspension bits from its larger M3/M4 cousins, the fleeter M2 handles even better than its famed family tree. Its 4-piston calipers brakes (up front, 2-piston in the rear) make sure you can stop with plenty of time, too.

No other car in its segment comes close to the M2’s track-time exuberance. With a base price of $51,700 (or just $56,400 fully loaded), its cohesive package blows away its closest competitors in the Audi S3 and Mercedes-AMG CLA45 — with not much of a price premium setting them apart. (The upcoming Audi RS3 might be able to step in the ring with the M2, if it ever lands stateside).

But to label the M2 as a track superstar sort of limits its ability, and its appeal. Once we’re done doing several 8-lap sessions on Laguna Seca we’re proffered another vehicle outfitted with a manual stickshift.

Climbing through the hills of Big Sur rowing through six gears is an instant argument for the Save the Manual crowd. That previously mentioned torque lets you make small work of the Sunday drivers blocking your path; the sound you’ll make blowing by them is an aural middle finger gurgling out of the quad tailpipes.

Arguably the most beloved M3 ever was the “E46” model from 2000 to 2006 — perhaps second only to the “E30” that single-handedly created the high-performance compact sedan segment in 1985.

The E46 was a thing of beauty; some would argue it’s when the M3 hit its zenith of balance, proportions and power. It’s worth noting then that the M2 is almost the exact same dimensions as that legendary E46 — it’s the same width, with only half-an-inch more height and one inch of additional length.

So when we say this is a throwback vehicle, it’s more so than simply a marketing ploy. For many purists and auto enthusiasts, these smaller, more nimble coupés were what made driving an art form. Let the M2 be your paintbrush.