The white-knuckled thrill ride is the ultimate driving experience for BMW fans. 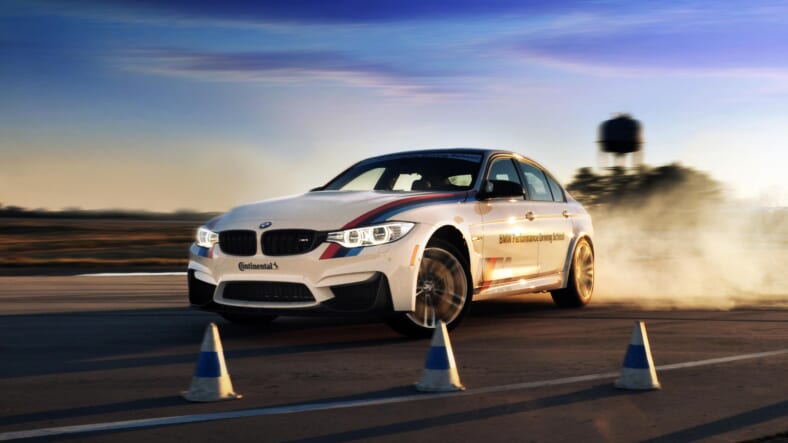 “Faster…. faster… faster!” Said the instructor in the passenger seat.

Sprinklers doused the windshield of my BMW 340i M Sport and soaked the polished concrete skid pad. I squinted between the wiper blades at the yellow line I was meant to be following around the circular track, trying to remember to keep my left foot on the dead pedal, my hands gently gripping the wheel at 9 and 3, and my eyes aimed only where I wanted the car to go.

My instructor’s name was Donnie Isley. He’s 61, and still races open wheel with the Sports Car Club of America. He’s trained with Secret Service and Homeland Security. I trusted him more than my own survival instinct.

I added pressure to the gas pedal and the back tires suddenly got a mind of their own—my turn pushed wide out from the center to the far edge of the track. The loss of control brought a rush of adrenaline.

“Feel that?” asked Isley. “That’s understeer, or push. Old Porsches had a big problem with push.”

I took a split second to appreciate the fact that he not only knows about old Porsches, but can critique their track performance. Then I took my foot off the throttle and turned into the skid, re-aligning the wheels.

I turn back toward the yellow line and the front wheels stutter with oversteer. Another quarter-turn of the steering wheel to correct the car’s path, and I continue along the yellow circle of adrenaline-fueled delight.

Every time I lost and brought the car back under control, my confidence grew. I had the sensation of breaking some sort of steel, German-engineered thoroughbred horse. Something in me had changed, and I knew I’d never be the same driver I was when I arrived that morning.

Isley re-engages traction control, and challenges me to make the car spin out.

In the rolling hills near Greenville, South Carolina lies the BMW factory that makes SUVs for the entire world. It’s a sleek, white complex resembling the father of all IKEA stores, minus the yellow flare.

Across the street from the factory is the BMW Performance Center, another gleaming white building surrounded by a series of test tracks, a 300-foot-diameter circular polished concrete skid pad, off-road courses, and a nearby “Free Trade Zone” track for test-driving vehicles straight off the assembly line without incurring taxes. (On the day I’m there, I hear they’re testing the X7 on the Free Trade track).

I arrived at 8:31 am for the 8:30 class of Car Control School, and was the last to arrive. I got a nametag necklace that looked and felt expensive, as if spawned from an M-series design lab, along with an M-branded notebook and pen.

My classmates came from all over the country: friends, a couple, a father and son, and father-in-law and son-in-law, a journalist, and a serial driving student, among others. 16 students sit at long desks facing Clint Kimel, a 69-year-old who recently retired from racing.

As a teenager, he was a rodeo bull rider. “No matter how good you do, you end up on the ground, so I got out of that,” he said.

He was also a champion precision shooter, in another lifetime. “I’ve lived an adventurous life,” he later told me.

Kimel headed the classroom portion of the day, as well as a few emergency drills on the track. For an hour and a half, we learned that we’ve been sitting wrong, holding the steering wheel wrong, holding our feet wrong, adjusting our mirrors wrong, looking in the wrong places… in short, everything we’ve done as adult drivers has been an accumulation over time of bad habits.

“The teenage class is great,” said Kimel. “If you tell them not to look at the cone or they’ll hit it, they don’t. Adults look right at the cone and run right into it. These are hard habits to break.”

“The brake pedal makes the road racer go fast. Never use a hard brake or hard throttle during a turn,” said Kimel.

We learned that ABS brakes were developed for airplane landings, and we learned how many feet it takes a modern car with ABS to achieve a dead stop at highway speed. In the process, we learned that no one drives at a safe following distance.

We started pairing up, because, “You can learn as much in the passenger seat as you can in the driver’s seat,” said Kimel.

The other solo student in my row was Preston Root, from Ormond Beach, Florida. He and instructor Donnie Isley had just gotten back 36 hours prior from the Nurburging.

Root is a retired NASCAR broadcaster, and announced races for the Motor Racing Network (MRN) for 30 years. He has taken BMW driving classes 8 times, and he brought along his daughter that day for the teen class. At one point, she passed us on an adjacent track and they shared a thumbs-up.

Stepping out the back door gave me my first real sense of the scale of the operation. There are fields and concrete lots filled with BMWs and Minis, a mechanic’s shop the size of a small airplane hangar, SUV’s, sedans, and motorcycles. The loading area resembles a cross between an airport tarmac, a racing pit, and a BMW dealership lot. And it’s in constant motion—fleets of vehicles coming in and going out all day long.

“It is a very well-oiled machine,” said my partner. In terms of sheer numbers, they average 5 classes per day, 7 days a week. In total, they train 15,000 drivers per year at this facility.

Every man wants to think he’s secretly gifted at sex, combat, and car racing. Very infrequently is this true. And so it was in this mental state that I attempted the first slalom cone run of the day in an M240i. It was a lackluster racing debut.

Next up was the Performance Track, which combines various elements of the day’s lessons: slalom, full-throttle straightaway, a 180-degree turn, hard brakes, and elevation changes. It was a baseline for where we were as drivers, and we were warned we’d be back later that afternoon for time trials.

After a change into the 340i M Sport, we went through some worst-case scenario drills.

“Not many people get a chance to practice a number 10 brake at fifty-five miles per hour,” said Kimel.

A “number 10 brake” is perhaps more commonly known as, “slamming on the brakes.” We tried it at 35, 40, 45, and 50 mph, as if there were an imaginary brick wall in front of us that we had to angle around. There were unconfirmed rumors among the students that the school goes through a set of tires for each car every two days. Whatever their actual lifespan is, that’s where the Center’s partnership with Continental Tires comes in handy.

Next up was an emergency lane-change drill, with a hypothetical cement truck blocking our lane. We had to take our foot off the throttle, make a quick turn between cones, then a number 10 brake to a dead stop. A lot harder than it sounds.

Through every exercise, our performance was dissected by instructors with automotive extra-sensory perception. They can watch you running a track lap from three hundred yards away and tell you through the walkie-talkie,

“Your foot moved too late to that brake pedal… Go slower into that turn and you can go faster, sooner.”

Even when you’re wearing sunglasses, they know where your eyes are looking. Simultaneous contemplation of the optimum blend of throttle, brakes and steering input taxes your entire being, and yet our 60-something instructors made it look like riding a bike. I would take the class again just to hang out with them.

After my skid pad training with Donnie Isley that afternoon, we were handed off to an instructor named Jim Clark––a former motorcycle racer, formula racer, and mechanic––for a wet-track elimination race they called the Rat Race.

The course was three laps around a wet oval track with the car’s traction control off. I lost my practice round, and waited for what would be my first and likely my last elimination round.

I won my first elimination race by a hair. And my partner Preston won his, naturally, so I had to go find another car.

“Maybe we’ll face each other in the final,” he said.

I won the semi-final a bit more comfortably, and Preston’s prediction proved correct: the final would be partner versus partner.

I drove to the outside lane and inched carefully up to the starting position, then listened to the walkie-talkie clipped to the door for Clark’s voice.

I was hard but steady on the throttle to avoid a spin-out, took the first turn carefully, then tore out wide, nearly to where Jim Clark was standing doing his play-by-play on the walkie-talkie, and then I gunned it.

“Think circle, not oval,” I’d heard a dozen times from the instructors. Treat the oval like a circle for maximum speed. “You paid for that pavement, so use it!” I knew I’d gotten a good start. And within the first lap, I knew I had it in the bag. I had finally found my groove.

After the race, Clark called over the two-way for an equipment check. Someone had suggested that my traction control had not been turned off, because my turns were too smooth. John, a father from New Jersey taking the class with his son, Ryan, came over and looked at my dashboard. “I can verify that it’s off,” he said.

I got back into the car with Preston. “I spun out on the start and never recovered,” he said.

We finished the day with timed trials at the same track I’d driven around disappointingly that morning. It was a whole new experience; my comfort with speed, throwing the weight of the car around, and using the brakes to go faster.

Preston won the time trials, handily. Bringing the ego PH of car 4 back into proper balance.

I thought of how much I’d put the cars through in a single day: a dozen number 10 brakes, oversteer, understeer, a 360-spin… I learned that these cars have a yearlong tour of duty before they are fully factory refurbished and sent to auction.

“My wife bought one after this and never had any issues,” said Preston.

We finished the day in the classroom. My right shoulder was tight from whipping the car around the slalom cones and the brick-wall-in-front-of-you simulations. My adrenaline comedown was offset by pride, but I was exhausted, body and mind. And I needed a shower.

“Greenville is a great city. But if you want to see any of it, go do it now,” said Kimel.

“Don’t go back to your hotel room thinking you’ll take a nap and go out later. You may not know it yet, but after what you did today, you are done.”