The BMW Titan Motorcycle Looks Like It Belongs in the Batcave 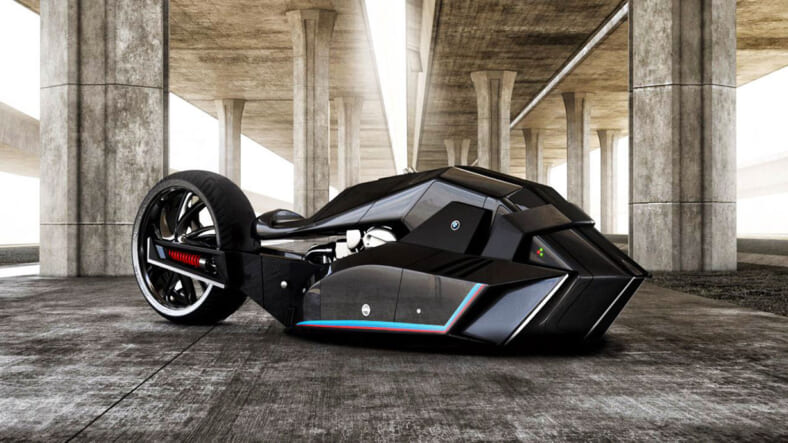 Low-slung and as technically advanced as a Tron light cycle, the BMW Titan motorcycle concept is Turkish designer Mehmet Doruk Erdem‘s notion of a futuristic BMW-powered land speed record bike, suitable for runs on the Bonneville salt flats of Utah.

“Titan is not recommended for routine daily rides, as it was built on a dream that consists of nothing but one feature: speed,” Erdem told Maxim via email.

The stylist says he took inspiration for the design from great white sharks, with a pointy nose meant to slice through the air and channel airflow to the turbocharged engine’s side-mounted air intake scoops.

The engine is fully enclosed for minimal drag at record speeds, while the rider can monitor its status through a dashboard control panel that oversees the suspension settings, fluid temperatures, pressures and other critical variables.

At the rear, Erdem has innovated with the enclosure of the driveshaft inside the left side of the rear suspension swingarm, while the spring and shock absorber are buried inside the right side, keeping all of them out of the airstream for reduced drag.

Practical for daily rides or not, it is encouraging to see motorcycle design pressing into fresh directions that escape the thoroughly mined cruiser and cafe racer themes.