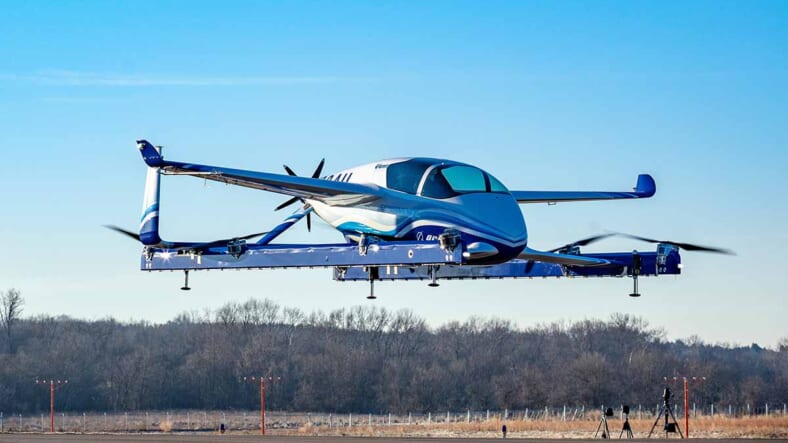 One day, one way or another, we’ll all end up flying everywhere. That’s one takeaway from learning that Boeing, arguably the biggest name in flight, just completed a successful test of its autonomous passenger air vehicle (PAV).

Yeah, if Boeing wants to fly us around the city in electronic self-piloting vehicles they are well-situated to do it, and those vehicles could look like the one above.

BREAKING: It’s another first for us. Along with @AuroraFlightSci we’ve successfully tested our passenger air vehicle. We continue our progress towards a safe and sustainable urban mobility ecosystem. #TheFutureIsBuiltHere pic.twitter.com/hwuw4d5jmz

Boeing NeXt is the manufacturing giant’s urban air mobility arm. Working in conjunction with Aurora Flight Sciences they’ve designed a practical vertical takeoff and landing (VTOL) craft, and the successful test was aimed at confirming the craft’s abilities.

CTO Greg Hyslop said in a company release that “Boeing’s expertise and innovation have been critical in developing aviation as the world’s safest and most efficient form of transportation, and we will continue to lead with a safe, innovative and responsible approach to new mobility solutions.” Translation, (probably): ‘We’ll make this work as well as the 727.’

Realistically, the test was a Boeing milestone but it wasn’t all that earth-shattering, on the surface. But no less than Tesla billionaire Elon Musk saw that it was a significant development.

Cool that this is happening on many fronts. Looks like a good design by @Boeing.

It’s what Boeing likely has in store that might catch the interest of anyone who has ever found themselves frustrated at not yet owning a Jetsons-style flying car. From the company’s release:

Future flights will test forward, wing-borne flight, as well as the transition phase between vertical and forward-flight modes. This transition phase is typically the most significant engineering challenge for any high-speed VTOL aircraft.

To put a fine point on it, here’s why Boeing’s entry into the competition to launch everyday commuting into the air is a big deal—the NeXt subsidiary is in the business of connecting the industry to regulatory agencies with an eye toward making autonomous flying cars an everyday thing. Boeing has the size and the money to push for changes in statutes and rules and just make that kind of thing happen.

Everyone should cross their fingers and hope the parachute and airbag industries keep pace with the flying machines.