That’s WAY faster than the Concorde. 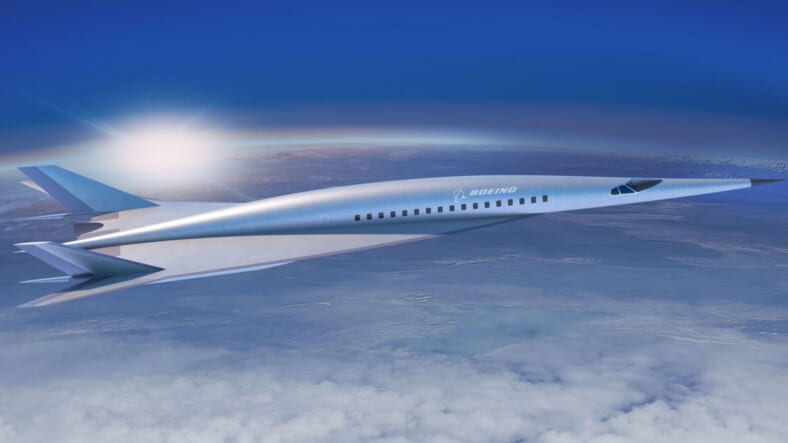 The concept was just unveiled at the American Institute of Aeronautic and Astronautics conference in Atlanta. At those almost unfathomably fast speeds, the lengthy 11-hour flight from LA to Tokyo would be reduced to a just three-hour jaunt.

“Boeing is building upon a foundation of six decades of work designing, developing and flying experimental hypersonic vehicles, which makes us the right company to lead the effort in bringing this technology to market in the future,” said Kevin Bowcutt, senior technical fellow and chief scientist of hypersonics.

The innovative aircraft manufacturer has been working towards hypersonic flight since the ’50s. In 2013, their X-51 experimental drone set records when it flew at Mach 5 for 3.5 minutes.

You don’t need (or want) to go Mach 5 during takeoff. Boeing’s designers envision using a commercial turbofan engine capable of a wide range of speeds that can be bypassed when it’s time for the airplane to really zoom. Besides, a traditional engine’s fan blades would disintegrate at such velocities. While traveling at hypersonic speeds, you don’t need fan blades to compress air anyway because the speed of the craft does that for you.That’s why most modern hypersonic jet designs rely on a ramjet, which uses the plane’s forward motion to compress air, to reach truly awesome speeds.

“The turboramjet would be designed to valve the air so it bypasses the (turbofan) engine and dumps into a combined afterburner ramjet,” Bowcutt told Popular Mechanics. “That same afterburner would function as a ramjet.”

Boeing estimates their hypersonic passenger jet will be airborne in the 20 to 30 years.

Until then, we can look forward Lockheed Martin and NASA’s newest X-plane. That supersonic aircraft is expected to being making 1000-mph commercial flights speeds in the next decade.

The future is coming at us fast.