Why the Most Expensive Bugatti Yet Will Only Go 43 MPH

And why you’ll still lust after it. 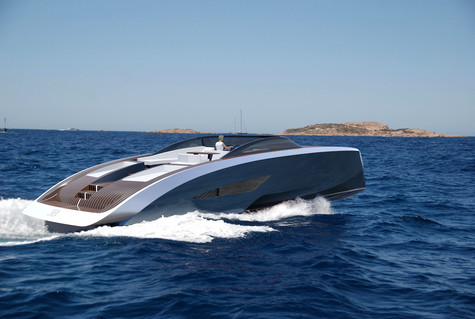 Even more pricy than Floyd Mayweather’s outlandishly ostentatious Veyron Grand Sport Vitesse, the new Bugatti PJ63 Niniette will eclipse $3.5 million, but only top out at 43 miles per hour (43.4, to be precise). That’s modest by land-based standards (hell, not even out of first gear), but pretty respectable for seafaring vessels like this, the middle model of three curvy, carbon fiber-clad sports yachts.They’ll be produced in a joint venture between the infamous luxury car maker and renowned yacht builder Palmer Johnson (the “PJ” in the model name). Although it seems like a departure for the Volkswagen-owned top-shelf brand (amidst the parent company’s legal woes, no less), company founder Ettore Bugatti actually cut his teeth developing racing boats over 80 years ago. Adding a personal touch to the project, “Niniette” was the pet name he gave to his daughter Lidia.

To be made available in lengths of 42, 63, and 88 feet, each of the uber crafts will take 12 months to produce. (The smallest will go for around $2.2 million and the cost of the largest hasn’t yet been disclosed.) Blending stylistic elements of such classic land-based Bugattis as the Type 57 C Atalante and Type 41 Royale with Palmer Johnson’s modern SuperSport series, this high-end product of hybrid design will surely turn heads on whatever surf it sashays through.