James Bond’s gadget-packed spymobile has actually been built, and it’s kind of amazing. 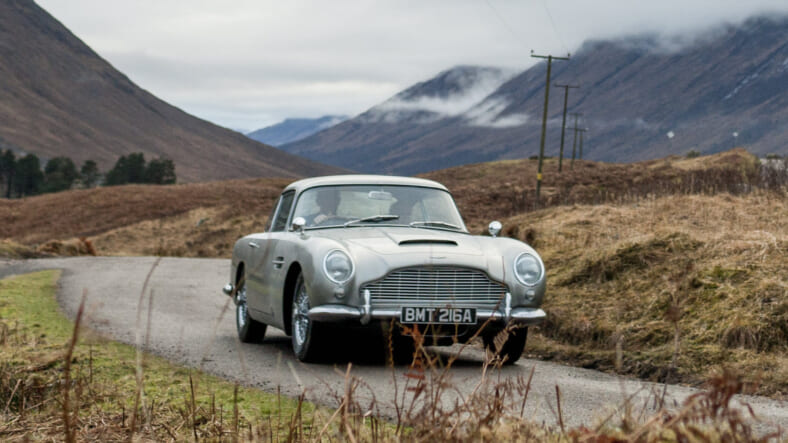 Last summer we reported that Aston Martin would be making 25 “continuation” cars modeled on the iconic gadget-equipped 1964 DB5 driven by Sean Connery in Goldfinger for $3.5 million apiece. Aston said at the time that some of the gadgetry would be functional but did not provide details.

Now the marque has revealed them, and a surprising number of Q Branch’s upgrades will be in working order. Developed in collaboration with EON Productions, which produces the James Bond films, the custom silver DB5’s most iconic gadgets were developed by special effects master Chris Corbould, who was worked on 11 of the 007 movies.

While the list is still “subject to final engineering approval,” the continuation Bond DB5s will feature a rear smoke screen, oil slick sprayer, and a bulletproof shield; front mounted machine guns; front and rear battering rams; and revolving license plates. The machine guns are “simulated” and won’t actually fire live ammo – but they’re realistic enough to keep the car from being street legal.

And we’d say they’re also realistic enough that should some well-heeled Bond fan want to further tweak one of the $3.5 million rides so that it could actually fire bullets, it wouldn’t be terribly difficult. Ditto the oil slick which at the moment is designed to simply spray water.

Easy enough to change that. And as long as you have the relevant firearms permits, only use them on private roads, and don’t maim anyone, in several states it most likely not too much of a problem — though having a good Second Amendment attorney on retainer might be a good idea.

“The guns appearing from the front lights were a particular challenge as, in the film world, we are able to use flammable gas mixtures combined with an ignition system to produce a flame and noise effect,” Corbould says. “Clearly this is not practical in untrained hands, so we have devised a new system to achieve a realistic effect” without actually spraying lead.

“The main challenge has been to recreate the gadgets from the film world and transfer them into a consumer product,” Corbould notes.

“We have license in the film world to ‘cheat’ different aspects under controlled conditions. For instance, we might have four different cars to accommodate four different gadgets. We obviously don’t have that luxury on these DB5s as all the gadgets have to work in the same car all the time.”

Inside the cockpit of the car will be a simulated radar screen tracker map, a telephone in the driver’s door, gear knob buttons and armrest and centre console-mounted switchgear for firing the machine guns and operating the other gadgetry, as well as a hidden firearm compartment under the seat.

Aston tells us that most of the 25 examples have already been spoken for, and the first cars will be delivered to customers next year.

So if you do happen to see one aiming its machine guns at you, we’d advise getting the hell out of the way just to be safe.