This Insane Flame-Throwing Scorpion Car Can Now Be Yours

It’s for sale on eBay–just in time for Burning Man. 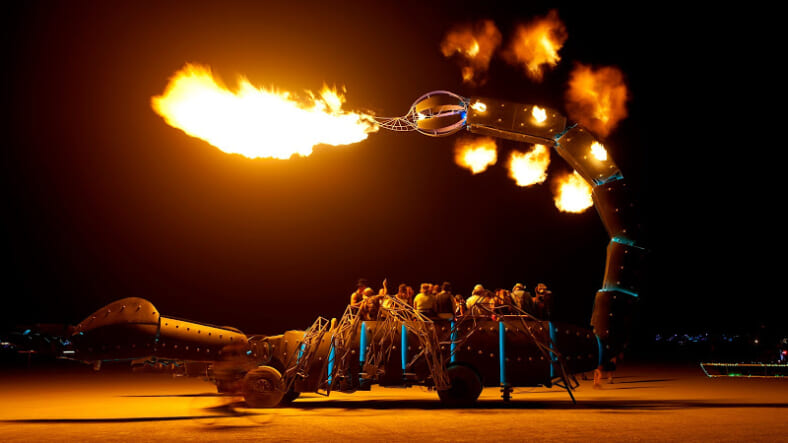 This Scorpion Art Car has been creeping out Burning Man attendees since 2011, and is now available on eBay, with a starting price of $50,000.

Aerospace engineer Kirk Jellum says he spent $225,000 building this mechanized critter, when he wasn’t busy working on the James Webb space telescope that will replace the Hubble telescope.

The Scorpion’s chassis is from a 1991 International boom truck, and in insect form it is now 55 feet long, 22 to 45 feet wide, and 39 to 45 feet tall. A computer controls operation of the seven-gun flame thrower and the 21 hydraulic points that move the tail, legs and claws.

Jellum emphasizes that the scorpion was constructed with the highest quality, and is not a jalopy that will break down while you are in the wastelands where there is no AAA service. That, and the cost to build it, make the $50,000 price a bargain. Basically, can’t afford to NOT buy this thing.

It is probably impossible to predict what your life will be like after you arrive at Burning Man with this amazing machine, so get clicking. He’ll probably accept PayPal, right? He should, anyway, since that’s where longtime Burner Elon Musk made his first fortune.

If you’re springing for the Scorpion Car, don’t forget to rent a trailer, too—you’ll need it to haul it home after the party’s over.