The 200 MPH CTS-V Is The Fastest Cadillac Ever

Who’s your Caddy? It’s this one if you’ve got a need for speed. 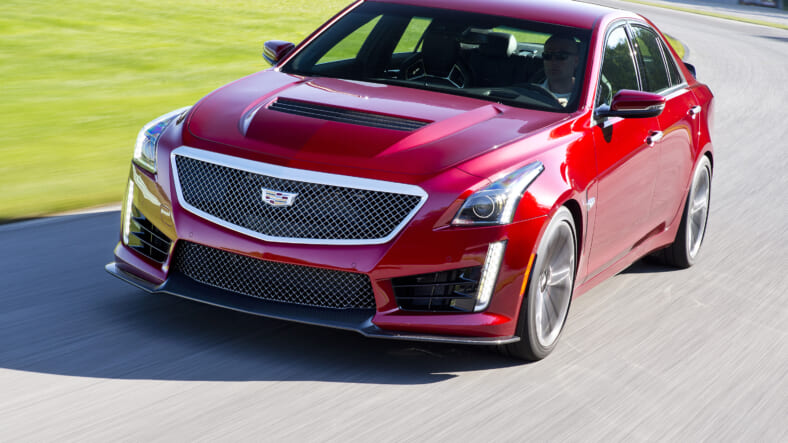 “No expense was spared.”

It was a recurring line in the original Jurassic Park, as the mad scientist sought to mollify skeptics with his thoroughness.

It applies equally well to the 640-hp, 200-mph 2016 Cadillac CTS-V. The car stuns with both the visible quality of its execution and its lavish (for a Caddy) $95,985 price tag. But its muscular performance makes it — by a wide margin — the fastest Cadillac ever and also quicker than any of its blue-blood German competitors.

The CTS-V makes a strong initial impression, with its intimidatingly aggressive styling and its impressive detailing, with touches like brushed nickel-finish wheels and carbon fiber trim whose visible fabric is carefully matched for symmetry.

Previously, Cadillac details might have suggested that some expense was spared. But no more.

Slipping behind the wheel, the driver is locked firmly into place in the bolstered racing-style seat, and the thick-rimmed steering wheel similarly conveys a feeling of extreme mastery, whether the driver warrants this feeling or not.

If the firm seating position doesn’t bring the message home that Cadillac is serious about delivering credible performance cars, then a touch of the starter button should seal the deal. A press of the red button ignites a storm that seems to surround the driver, as the CTS-V seems it instantly channel a NASCAR Sprint Cup racer’s raucous thunder.

Cold starts are shocking, as the CTS-V opens its muffler bypass valves and the supercharged 6.2-liter small block V8’s fast idle aims to quickly warm the pollution-scrubbing catalytic converters to operating temperature. This is great fun for car nuts heading out to shred their favorite road on a beautiful afternoon. It is surely infuriating to be the neighbor of a CTS-V owner with an early morning gym habit.

Among test cars, so far only the Audi R8 V10 Plus rattles neighbors’ windows so brutally on start up. For such cars, I’ve begun starting them in the garage with the door still closed to try to dampen some of the start-up furor until muffler bypass valves switch back to normal position.

Exciting cars with thrilling exhaust notes are a key factor in the appeal to automotive enthusiasts, but when the vehicles in question have the ability to turn mufflers on and off, there should surely be a “quiet mode” setting permitting considerate owners to tiptoe out of their neighborhoods during the wee hours.

It is one thing to piss off the neighbors with a jacked up Camaro when you are 17, it is entirely another to do it when you are old enough to afford a car with a near six-figure price tag.

We had the great fortune to drive the CTS-V both in its element, on the race track, on Michelin Pilot Super Sport tires, and in real life, where snow sometimes falls and cars need winter tires instead of race rubber.

On the track, the CTS-V delivers on its promise. Hammer the car hard, and it delivers, zooming around the Road America temple of speed with confidence-inspiring precision and stunning velocity. All the while, the open mufflers deliver the proper soundtrack to entertain the driver and make him or her feel like they are on a qualifying lap for the 24 Hours of Le Mans.

The car has a selectable drive mode, and switching from “track” to “sport” mode produces clear changes, ones that you don’t want when you’re driving on the track. Softening the suspension for a more comfortable street ride slows the CTS-V’s responses when blasting around the race track, causing it to miss corner turn-in points and apexs, so there is no doubt of the value of the adjustable suspension when driving on the track.

The firm, direct steering provides exactly the feedback drivers need to place the CTS-V exactly where they want it on the track. The system has an edge over the steering in the BMW M3 and M4, which seems to suffer a bit of vagueness in comparison to the Cadillac’s accuracy.

There is no debating this issue, the automatics are faster at the track, and of course, easier to live with when commuting. They just aren’t as much fun for drivers who like shifting for themselves. Either way, 60 mph is less than four seconds away.

The race-worthy Brembo brakes slow the CTS-V from speed like a deployed drag ‘chute, and they do it for lap after lap with no fade. These brakes are unimpeachable at the track. On the street, however, they squeak and squeal loudly, turning heads and surprising onlookers expecting to see a neglected Pinto on the other end of such sounds. Even Ferraris have this problem with race-ready brakes, but it doesn’t make it any easier to stand the noise when rolling in to the Four Seasons hotel.

In the real world, where weather happens, the snow mode serves as a safety net for mistakes. It could be tuned for more intrusive intervention, considering that someone driving a rear-drive sport sedan is probably more concerned with keeping it pointed forward than having the ability to slide around like a teenager in the Wal-Mart parking lot.

Giving the CTS-V an imprudent amount of gas on a snow-covered street caused it to kick its tail out to the side before the stability control clamped down with application of a rear brake to snap the car back into line.

After all, you’ll want to be careful driving the CTS-V in the snow, because at $96,000, no expense was spared in its purchase.